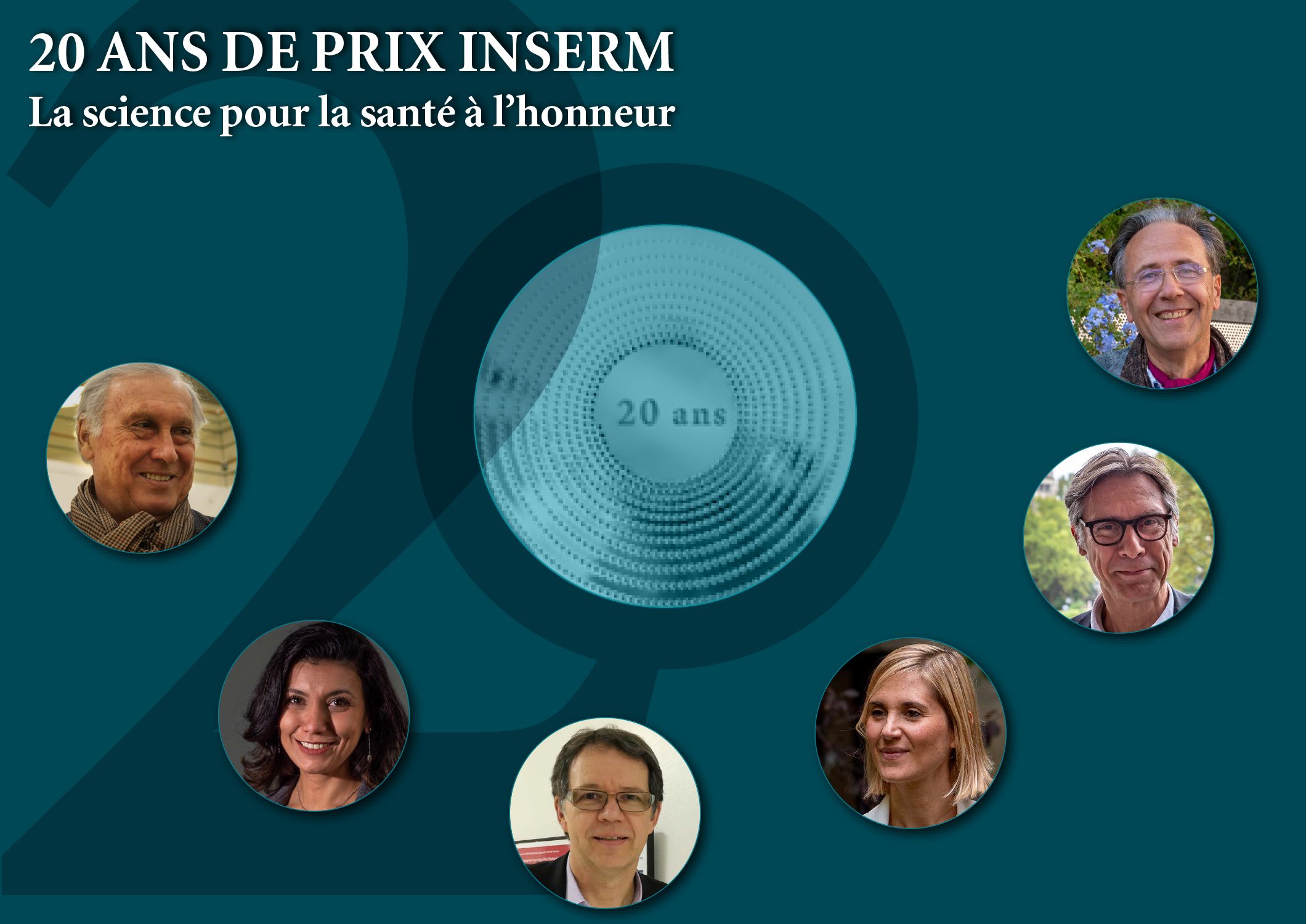 This year marks the 20th annual Inserm Prize ceremony, to take place on Tuesday December 10 at Collège de France in celebration of six researchers and engineers whose achievements have helped raise the level of scientific excellence at the Institute, in the service of health for all.

“By paying tribute to its talented scientists for the 20th year running, Inserm celebrates the passion and commitment of the women and men who represent the diversity and excellence of our research, in the service of health for all”, declares Gilles Bloch, Inserm Chairman and Chief Executive Officer.

The Inserm Grand Prize this year is awarded to Éric Gilson, whose research has contributed to major advances in the biology of aging, and who is Director and founder of the Institute for Research on Cancer and Aging in addition to Scientific Coordinator of the Inserm AgeMed research program.

From a very early stage in his career, Éric Gilson has been passionate about the knowledge frontier in chromosomes. His desire to question scientific dogmas has led him to play a decisive part in elucidating the role of telomeres – repeated DNA sequences found at the extremity of the chromosomes. It is to him that we owe the discovery of the protective protein caps that contribute to chromosome stability. Far from restricting himself to fundamental research, Gilson wanted to link his research field to more general issues related to the biology of aging and cancer. In 2012 he founded the Institute for Research on Cancer and Aging in Nice, with the support of Inserm, CNRS and Université de Nice. He continues to direct this institute, which was one of the first in the world to combine cancer and aging in a common biology and which continues to attract high-caliber researchers from France and abroad. Since its launch in 2016, Gilson is also the Scientific Coordinator of the Inserm research program AgeMed, which brings together researchers from all walks of life to study the aging process in its entirety.

The Research Prize is awarded to researchers, lecturer-researchers and clinician-researchers whose work has made a significant impact on fundamental research, clinical and therapeutic research and public health research. Inserm Research Director at the Center for Research on Epidemiology and Statistics, Mathilde Touvier leads the Inserm Nutritional Epidemiology Team. There she has contributed to the development of the Nutri-Score nutritional labelling, rolled out in France and various European countries, which represents a true step forward in the promotion of good health. She also coordinates the NutriNet-Santé study – the world’s first nutrition research cohort – in which she leads research to shed light on the link between the consumption of ultra-processed products and the development of cancer and cardiovascular disease.

In line with the Institute’s long-standing tradition of international cooperation, the International Prize rewards the careers of researchers established abroad. This year it is awarded to Michel Sadelain, Director of the Center for Cell Engineering
at the Memorial Sloan-Kettering Cancer Center in New York. Fascinated by the future of gene transfer, this physician-researcher has spent twenty years developing a revolutionary cancer-fighting technique that improves the efficacy of T cells in immunotherapy procedures. His principle? Take the patient’s own immune cells, manipulate their genetic heritage, and then inject them back!

The Prize of Honor acknowledges the career of an eminent scientific figure. Jean-François Delfraissy, President of the French National Consultative Ethics Committee (CCNE), is awarded this prize for his research and discoveries in infectious diseases, in addition to his commitments to fighting AIDS and to its patients. Implicated from the late 1980s in the fight against the HIV epidemic that shook the medical world, he set up the Virus, Neuron and Immunity research unit at Kremlin-Bicêtre Hospital and created the first AIDS patient cohorts, bringing fundamental and clinical research together. At the helm of ANRS from 2005 to 2016, Delfraissy was also Director of the Aviesan Immunology, Inflammation, Infectiology and Microbiology Multi-Organization Thematic Institute, and leader of the Ebola Task Force in 2014.

With this prize, the Institute rewards efforts to promote research and the ability to be truly in dialogue with societal expectations and citizens’ health questions. Chairman of the Inserm Ethics Committee, Hervé Chneiweiss is renowned for his work on astrocytes, whose functioning he has elucidated. His research, at the frontier of neurology and genetics, very quickly led him to develop an interest in bioethics and the place of science in society. Adviser to the cabinet of the French Research Minister from 2000 to 2002, his responsibilities involved the initial revision of the bioethics laws. Both Inserm and the French Parliamentary Office for the Evaluation of Scientific and Technological Options (Opecst), of which he was a member of the Scientific Advisory Board, wish to pay tribute to the career of an individual who, elected Chairman of the Unesco International Bioethics Committee in July, now upholds this commitment beyond our borders.

Research is also comprised of and supported by engineers, technicians and administrative staff: the Innovation Prize is dedicated to them. Originally from Italy, Chiara Guerrera joined the brand new university proteomics platform of the Necker federative research structure (Inserm/APHP/Université de Paris) as a Research Engineer in 2006. She worked on developing this young structure into a very high level platform that not only offers technical assistance in line with the researchers’ needs but also the appropriate strategic and methodological support. Her team has participated in identifying biomarkers that are decisive in the understanding of serious diseases such as cystinuria and cystic fibrosis.