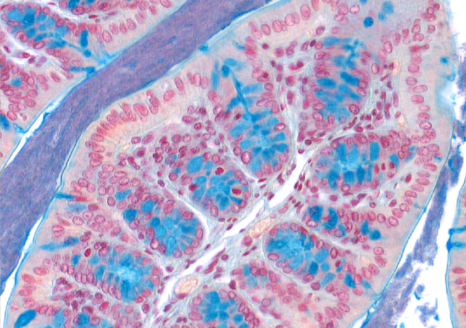 Emulsifiers are food additives that are used to improve texture and extend shelf life. They are found in many processed products (ice cream, packaged cakes, sauces, etc.) despite having demonstrated harmful effects on intestinal balance. In a new study, scientists from Inserm, CNRS and Université Paris Cité at Institut Cochin in Paris sought to counteract these effects by using Akkermansia muciniphila, a bacterium naturally present in the intestine, to repopulate and thus strengthen the intestinal epithelium. The addition of this bacterium to the gut microbiota is thought to prevent the damage caused by the consumption of emulsifiers. These data, published in Gut, confirm the growing potential of Akkermansia muciniphila as a probiotic.

Emulsifiers are consumed by millions of people every day and are among the most widely used additives in the food industry. Something that is not surprising given that they improve the texture of foods and extend their shelf life. For example, emulsifiers such as lecithin and polysorbates ensure the smooth texture of mass-produced ice cream and prevent it from melting too quickly once served.

Previous studies by the team of Benoît Chassaing, Inserm researcher at Institut Cochin (Inserm/CNRS/Université Paris Cité), have shown the consumption of certain emulsifiers to lead to alterations of the gut microbiota[1] and how it interacts with the digestive system. Such alterations lead to chronic gut inflammation and metabolic dysregulation. More specifically, this research has shown the consumption of food emulsifiers to induce the ability of certain elements of the microbiota to come into close contact with the epithelium, which is the first line of defense of the digestive tract and usually sterile.

In this new study, the researchers wanted to counteract the harmful effects caused by the consumption of emulsifiers by reinforcing the intestinal epithelium. To do this, they focused more specifically on the bacterium Akkermansia muciniphila, which, being naturally present in the intestine has already been shown to have an impact on the interactions of the microbiota with the rest of the body.

It is also known that the quantity of this bacterium is reduced when emulsifiers are consumed.

In the study, groups of mice were fed emulsifying agents as part of their diet, which for some of them was supplemented with a daily dose of Akkermansia muciniphila. The scientists saw that while the consumption of food emulsifiers was sufficient to induce the chronic inflammation associated with metabolic alterations and high blood glucose, the mice receiving Akkermansia muciniphila were totally protected against such effects. The administration of Akkermansia muciniphila was also sufficient in preventing all molecular alterations normally induced by the consumption of emulsifying agents, including the encroachment of bacteria into the wall of the epithelium.

“This research supports the notion that using Akkermansia muciniphila as a probiotic could be an approach to maintaining metabolic and intestinal health in the face of modern stressors such as emulsifiers that promote chronic gut inflammation, and the resulting harmful consequences. Furthermore, this suggests that colonization of the intestine with Akkermansia muciniphila could be predictive of individual propensity to develop intestinal and metabolic disorders following the consumption of emulsifiers: the greater the presence of the bacterium, the more likely the individual is protected from the harmful effects of food additives on the microbiota,” explains Chassaing, the last author of the study.

[1] All of the microorganisms – non-pathogenic (commensal) bacteria, viruses, parasites, and fungi – that live in the intestine.

TO CITE THIS POST :
Press release – Inserm press room A Bacterium to Protect the Microbiota from the Harmful Effect of Food Additives Link : https://presse.inserm.fr/en/a-bacterium-to-protect-the-microbiota-from-the-harmful-effect-of-food-additives/46313/