The researchers from INERIS and Inserm (a team managed by Olivier Kah in Inserm unit 1085 “Institute for research into health, environment and work”) have just developed a test in fish that allows us to detect the endocrinal disrupting effects of certain contaminants in the environment. The researchers based their work on a gene that expresses in the brain, and that reacts strongly to certain endocrinal disruptors. In order to make it easier to measure this gene, they used a fluorescent reporter gene. By using the embryos of zebrafish that are transparent, we can see the effects in the brain when the embryos are exposed to disruptor pollutants. The results of these works are published in the review Plos One. 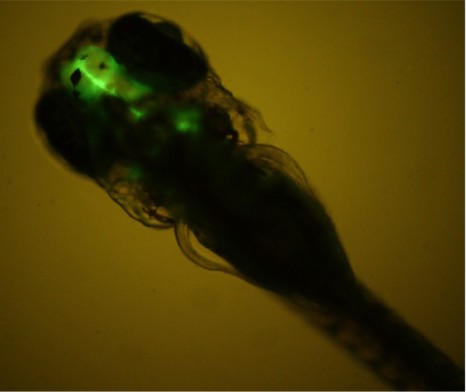 Fluorescence seen in the brain of the fish embryo, induced by the expression of gene cyp19a1b bound to the GFP.

Over the last 20 years, numerous studies have proved the harmful effects of artificial compounds on the reproductive capacity of organisms. Certain pollutants (nonylphenols, bisphenol A, pesticides, pharmaceutical residues, etc.) present in surface water, industrial waste or sediments are capable of mimicking the effects of oestrogens. They thus modify the biological processes that are controlled by oestrogens and are involved in the reproduction and growth functions of organisms, with potentially harmful consequences for the health of living creatures and their progeny. Such substances are known as “endocrinal disruptors” (ED).

The originality of the work carried out by the Inserm and INERIS researchers resides in the fact that the study of endocrinal disruptors concentrates on a gene that expresses only in the brain, and demonstrates the sensitivity of the nervous system to pollutants. The results obtained by the researchers confirm that in the fish embryo, a certain number of substances affect the activity of the stem cells in the brain, cells that are vital to the development of the central nervous system. This effect is seen in the expression of a specific gene in the brain that is extremely sensitive to oestrogens: gene cyp19a1b.

A zebrafish model to characterize ODs

Based on these observations, the INERIS and Inserm teams developed a test to detect oestrogen activity in a transgenic fish model. This transgenic zebrafish model (1) helps to identify the effect of pollutants on an enzyme from gene cyp19a1b, aromatase, that is responsible for the synthesis of oestrogens in the body.

The brain of the fish embryos uses a fluorescent reporter known as GFP (Green Fluorescent Protein), that renders it fluorescent when exposed to substances that mimic oestrogens.

21 components (e.g. natural or synthetic oestrogens; alkylphenols, bisphenols) of the 45 tested induced varying degrees of fluorescence. The metabolic capabilities of the model allowed us to detect substances such a certain androgens and certain synthetic progestatives (used in the contraceptive pill).

A test of this type is helpful in evaluating chemical substances, as required by the REACh (2) regulation. This tool is a complement to the existing in-vitro systems, and it has the advantage of integrating what will happen to pollutants in the body and of taking account of their metabolism, something than cannot always be done using tests on cells. Given its sensitivity, it could also be used to monitor aquatic environments.

The INERIS and Inserm researchers have finally opened up new prospects in the field of study of endocrinal disruptors in the central nervous system.

For the researchers themselves, it appears that this simple, robust and sensitive test will have many fields of application in assessing the risks implied in oestrogenic endocrinal disruptors.

Financed by the Ministry in charge of Ecology and the National Research Agency, the research undertaken by INERIS and Insert is aimed at pinpointing the ED potential of these chemicals, that are used in medication, cosmetics, phytosanitory products, plastics, etc.

About INERIS
The mission of the French National Institute for Environmental Technology and Hazards is to help to prevent hazards resulting from economical activities from affecting health, safety of persons and belongings, and the environment. It runs research programs aimed at better understanding the phenomena likely to lead to hazardous situations or dangers for the environment or health and developing its knowledge of prevention. Its scientific and technical know-how are made available to the state authorities, companies and local authorities so as to help them make the best decisions to improve environmental safety. Created in 1990, INERIS is a public commercial and industrial institute placed under the authority of the Ministry of the Ecology, Sustainable Development and Energy. It has a staff of 588 persons, based mainly in Verneuil-en-Halatte, in the Oise ‘département’. Website: www.ineris.fr.

About Inserm
Founded in 1964, the French National Health and Medical Research Institute (Inserm) is a public science and technology institute, jointly supervised by the French Ministry of Higher Education and Research and the Ministry of Health. The mission of its scientists is to study all diseases, from the most common to the most rare, through their work in biological, medical and public health research. Inserm support over 30à laboratories throughout France. In total, the teams include nearly 13,000 researchers, engineers, technicians and administrative staff, etc. Inserm is a member of the French Life Sciences and Healthcare Alliance, founded in April 2009 along with the CNRS (The French National Research Centre), CEA (Atomic Energy and Alternative Energy Commission), Inra (The National Institute for Agricultural Research), Inria (The French National Institute for Research in Computer Science and Control), IRD (The Institute for Research into Development), The Institut Pasteur, the Conference of University Presidents (CPU) and the Conference of Regional and University Hospital CEOs. This alliance forms part of the policy to reform the research system by better coordinating the parts played by those involved and by strengthening the position of French research in this field through a concerted plan.

(1) In collaboration with Professor B.C. Chung of the Academia Sinica in Taiwan.