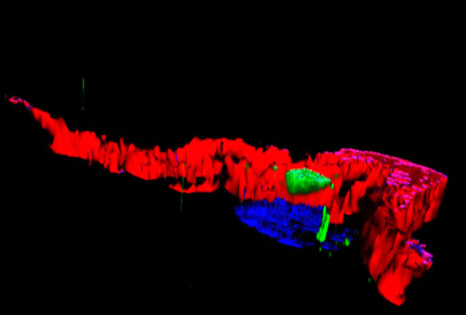 An image representing a 3D photo of a human adipocyte: in green the ALMS1 protein reservoir, in red a part of the cytoskeleton, and in blue the cell nucleus. © Vincent Marion

A new therapeutic target for type 2 diabetes has recently been identified by researchers from Inserm and Université de Strasbourg, in collaboration with several European hospitals. The target in question is ALMS1, a protein whose function is still poorly understood. It has come to light thanks to the study of a rare disease, Alström syndrome, which affects different organs and associates childhood obesity and type 2 diabetes. This research paves the way for the development of a new drug and has been published in Diabetes.

Obesity and type 2 diabetes are strongly intertwined. Around 80% of obese subjects develop the disease, although the reasons for this association have not yet been clearly established. In order to study the links between them, the team of Inserm researcher Vincent Marion at the Laboratory of Medical Genetics (Inserm/Université de Strasbourg) focused on Alström syndrome, an extremely rare monogenic[1] disease that affects multiple organs, and leads to both obesity and type 2 diabetes.

This disease is caused by mutations in the ALMS1 gene coding for a protein whose function is still poorly understood. “The fact that it is a monogenic disease provided a starting point for studying the complex mechanisms of type 2 diabetes,” emphasizes Marion. The team found that abnormalities in adipose tissue caused by loss of ALMS1 function led to type 2 diabetes in people with Alström syndrome. What is more, in animals, restoring the function of this protein restored blood glucose balance. The researchers have therefore identified a new therapeutic target for type 2 diabetes: the ALMS1 protein.

These findings are the result of several years of research based on different clinical and experimental approaches, carried out in vivo in subjects with Alström syndrome and in a mouse model for the disease, as well as on in vitro observations. The researchers have identified abnormalities in the structure and function of adipose tissue in people with Alström syndrome that are far more significant than those found in obese individuals with the same body mass but without the disease. In mice, these abnormalities were associated with the inability of adipocytes, which make up the adipose tissue, to absorb glucose. “By preventing adipocytes from absorbing glucose, the loss of ALMS1 function is directly responsible for type 2 diabetes, making it a very interesting therapeutic target,” explains Marion.

In the study published in Diabetes, the researchers wanted to evaluate the therapeutic relevance of this protein by restoring the expression of the ALMS1 gene in their mouse model. Doing so restored blood glucose balance in these animals by increasing their glucose absorption.

The researchers also worked in vitro with adipocytes from people with Alström syndrome in order to understand the underlying molecular mechanisms that explain why this protein helps restore blood glucose balance. They found that in these adipose tissue cells, the ALMS1 protein acts far downstream of an insulin-controlled molecular signal chain.

“Thanks to this research using a rare disease model, we have discovered a molecule that by itself is capable of increasing glucose absorption by the adipocytes and maintaining good blood glucose balance. This makes it a very good therapeutic target for type 2 diabetes in general, whether or not it is associated with obesity,” explains Marion.

By identifying and using a molecule capable of targeting this ALMS1 protein in subjects with type 2 diabetes, the hope is to improve diabetes control, regardless of the level of circulating insulin in these individuals. A peptide is already under development.

Preclinical animal testing is being finalized and clinical trials are expected to begin in 2021 in subjects with type 2 diabetes, whether or not they are obese. Ultimately, if this drug candidate proves to be safe and effective, it could be prescribed alone or in combination with other diabetes drugs that target other molecular mechanisms.

On the strength of these results, the researcher has founded the company ALMS Therapeutics, in order to capitalize on this discovery.

[1] Genetic disease resulting from the mutation of a single gene