A novel device that makes it possible to draw and write using just eye movements has been developed by a CNRS researcher at the Centre de Recherche de l’Institut du Cerveau et de la Moelle Epinière (CNRS/UPMC/Inserm). Subjects can use it like a pen to write numbers, letters, figures, their signature and even use their eyes to draw using a very simple technique comprising an oculometer[1] and a computer screen. This remarkable feat is based on a visual illusion that enables the eyes to follow smooth and clear trajectories after only several hours of training. This system could improve the living conditions of patients suffering from paralysis of the limbs. This work is published on the 26 July 2012 in the journal Current Biology.

Current writing devices using eye movements only allow users to choose from words or letters that are displayed on a screen but do not give them the freedom to draw their own figures. Until now, this was thought to be impossible. In fact, although the eye can follow a moving object very efficiently, it is not capable of performing smooth, regular movements in front of a static background. Any attempt in this sense results in a succession of quite irregular jerks.

To obtain smooth trajectories of the eye, Jean Lorenceau, CNRS researcher at the Centre de Recherche de l’Institut du Cerveau et de la Moelle Epinière (CNRS/UPMC/Inserm) came up with the idea of using a visual illusion called reverse-phi, which has been known since the 1970s but which has not until now found any applications. The illusion occurs when several hundred disks whose luminance[2] varies over time at a frequency of around 10-15 Hertz (Hz) are displayed on a screen. When the user’s eyes move over this flickering background, the subject has the clear impression that the disks move with the displacement of the eyes. Since the human eye is capable of following with precision moving objects, the illusory movement of the disks induced by the movement of the eyes gives them a sort of moving support, allowing them to realize regular and non-jerky trajectories. An oculometer1 records the movements of the user’s eye and very simple software enables these movements to be visualized on a screen. Two to four training sessions lasting around 30 minutes are all that are needed to be able to manage eye movements and draw letters. In tests carried out, subjects firstly learned to perceive the reverse-phi movement then to “cling” onto this movement somewhat like a surfer who “clings” onto a wave. Then, the subjects progressively learned to “surf” on this visual illusion of movement to guide their eye movements at will. Thanks to this system, well-trained individuals can write with their eyes at more or less the same speed as with their hand. Although the concentration required to draw figures can become tiring in the beginning, training enables automatisms to be created that facilitate writing. 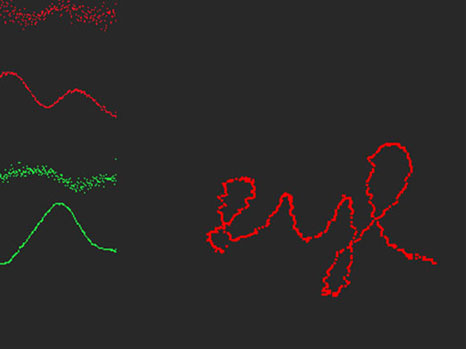 This device could give persons suffering from limb paralysis the means to personalize their writing, write their own signature and, more generally, to express themselves and communicate in a more creative and free manner.

The next step in this research will consist in proposing to persons suffering from amyotrophic lateral sclerosis to use the invention. However, Lorenceau believes that this system opens the way to other applications: it could be used to train pilots, surgeons, sportsmen, artists[3] and other persons whose activities require precise oculomotor control. It could also make it possible to design security systems based on the recognition of eye movements.

[1] An oculometer enables eye movements to be recorded by analyzing images of the human eye captured by a camera to calculate the direction in which the subject is looking.

[2] Luminance is the intensity of a broad source in a given direction, divided by the apparent area of said source in the same direction. It is a photometric quantity, in other words it depends on the sensitivity of the human eye.

[3] A collaboration is currently underway with the contemporary artist Michel Paysant, who creates eye drawings, the objective of which is to test the new possibilities of this device => http://www.michelpaysant.fr/onlab/

An Inserm team at the Lille Neuroscience & Cognition laboratory (Inserm/Université de Lille, Lille University Hospital) has joined forces with its counterparts at Vaudois University Hospital (CHUV, Lausanne) to test the efficacy of GnRH injection therapy in order to improve the cognitive ...