A step closer to morphine without side effects?

Morphine has been used for centuries to relieve severe pain. However, its pain-relief properties are coupled with considerable side effects. Morphine imitates the action of molecules produced naturally by the brain (endorphins). So why does it have such harmful side effects? This question has recently been elucidated by Sébastien Granier, researcher at the Institute of Functional Genomics (Inserm/CNRS/Universités de Montpellier 1 and 2) and his team, in conjunction with collaborators in the US. The 3D structure of brain receptors is likely to differ, depending on the type of molecule bound upon it (morphine or endorphin): the body’s response will be completely and accordingly modified. Thanks to this discovery, the researchers have now set their sights on retaining the benefits of morphine while eliminating any undesired side effects.

The results were published in the Nature review on 21 March 12.

Opium is a natural poppy (papaver somniferum) extract and is one of the oldest drugs known to man, used for its psychotropic, sedative and analgesic properties. These effects are caused by its major component: morphine. Today morphine has widespread clinical pain-relief applications.

Morphine’s action is relayed by μ-opioid receptors expressed at the surface of cells in the central nervous system. These receptors are part of a superfamily of proteins, G protein-coupled receptors (GPCR), which are the target of around 30% of drugs currently on the market.

At a molecular level, morphine binds with μ-opioid receptors to imitate the action of molecules produced naturally in the brain: endorphins. However, its clinical use is limited by two effects. Firstly, the development of a tolerance phenomenon means that, in the case of repeated injections, the morphine dose must be increased to obtain the same therapeutic effect. Secondly, morphine consumption can lead to drug dependency (heroin, the acetylated form of morphine, is the most obvious example). Furthermore, morphine consumption has serious side effects: respiratory depression, constipation, physical and psychic dependency. These harmful effects can be explained by the fact that morphine triggers a cellular response that differs from that triggered by endorphins. Since morphine and endorphins bind with the same receptor, the two molecules stabilize the μ-opioid receptors in separate spatial conformations that cause the differences in biological responses.

“It is therefore essential to understand the structural bases of morphine action, and opioids in general, if we are to develop molecules that retain the beneficial effects of morphine whilst eliminating the side effects,” explains Sébastien Granier, Inserm researcher and project leader.

The research produced by Sébastien Granier (and Brian Kobilka’s team in Stanford) resolved the 3D structure of μ-opioid receptors when associated with a molecule that has a similar chemical structure to morphine. 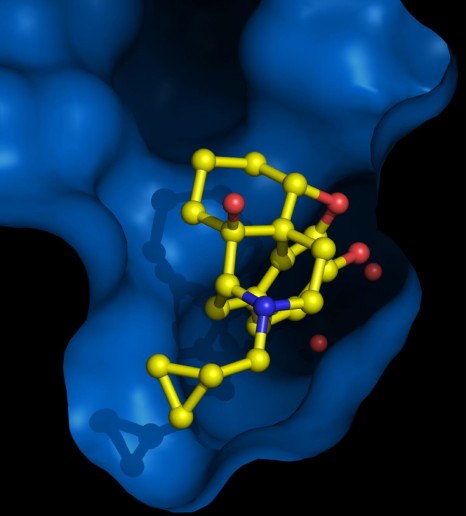 The images of the 3D structure above show that the specific area in the receptor where the opioid molecule binds is mostly open to the external medium, thus explaining the rapid action of these components.

The structure also reveals a very important characteristic of this receptor function: the formation of a receptor dimer (1). “This is the very first time that we have succeed in producing images of the 3D structure of a complex of this kind for this receptor family” he adds. This structure with a μ-opioid receptor dimer opens up avenues of research to study this phenomenon and improve understanding of these functional implications.

The 3D structure resolution of the μ-opioid receptor holds the key to treating pain and addictions, and could, in the long-run, lead to the production of new analgesic medicine with no side effects.

TO CITE THIS POST :
Press release – Inserm press room A step closer to morphine without side effects? Link : https://presse.inserm.fr/en/a-step-closer-to-morphine-without-side-effects/1320/