A European group of academic laboratories and industrial scientists from SMEs will combine integrative systems biology & comparative genomics for studying human brain ageing and/or most common age-related diseases with a special emphasis on late-onset Alzheimer Disease for identifying and validating new molecular targets and biomarkers. This four-year research programme is coordinated by Inserm (Pr Michel Simonneau).

Ageing is undisputedly a complex process because it affects the deterioration of most (if not all) aspects of life. Cognitive decline is emerging as one of the greatest public health challenges of the old age, with nearly 50% of adults over 85 afflicted by Alzheimer’s disease, the most common type of dementia. 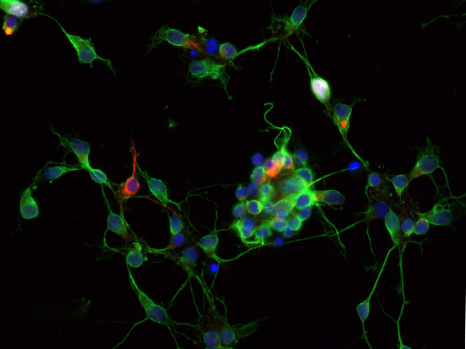 As other chronic and neurodegenerative diseases, Alzheimer’s disease develops slowly and gradually; but is distinctive in that it forces patients to endure many years of steadily-lessening contact with others, because of memory loss, difficulty with orientation, loss of language and speaking abilities, judging things and depression amongst numerous other symptoms. In 2013, it is estimated that there are worldly more than 24 million people with Alzheimer’s disease, with 4.6 million new cases each year, which means a new case each 7 seconds. It is thus one of the greatest challenges in public health for modern societies, in terms of costs but also in terms of cause, cure and care. To address all these issues, European Commission-funded research effort is crucial as there are still no curative drugs, with only symptomatic treatment able to delay the disease progression.

Over the last years, Genome-Wide Association Studies (GWAS) have been instrumental to identify genes that mediate genetic risk associated to Late-Onset Alzheimer Diseases (LOAD). These approaches based on the genetic comparison of large cohorts of patients and healthy aged persons, and for which three academic partners have been involved (Inserm U894; Institut Pasteur Lille, University of Antwerpen), have been largely funded by Europe. Additionally, a variety of new sets of data have been built and have delivered the state-of-the art of protein-protein interactions, their localisation in subregions of human neurons and genome-wide transcriptome analysis of human neurons derived from aged patient fibroblasts. In another field, new drosophila and mouse models have been also generated via academic partners involved in European Commission-supported large-scale programmes. Finally, the analysis of genes displaying an accelerated evolution in humans as non-human primates do not display these human-specific neurodegenerative diseases has open interesting research paths. So far however, in spite of a huge amount of data available and existing in vitro and in vivo models, these approaches have not been successfully translated into the clinic separately.

The AgedBrainSYSBIO will take advantage of these large set of data, will cross them to other large-scale ageing databases and will include all of these know-how, technologies and results. Thanks to the involvement of four European SMEs, this program is expected to get results readily translated into preclinical studies.

AgedBrainSYSBIO project assembles 13 well-established research teams both from academia and industry. The scientists will share results and know how on LOAD GWAS gene discovery, comparative functional genomics in mouse and drosophila models, in mouse transgenic approaches research on human induced pluripotent stem cells (hiPSC) and their differentiation in vitro and modelling pathways with emphasis on comparative and evolutionary aspects. Importantly, the four European SMEs involved will bring their complementary expertise. QURETEC (Estonia) will be a key partner for data management solutions and bioinformatics data analyses; HYBRIGENICS (France) is a world leader in comparative proteomics and protein-protein interaction analyses; GENEBRIDGES (Germany) is marketing novel strategies for DNA engineering in mammalian cells; reMYND (Belgium) is a leader for development of protein misfolding-modifying treatments against LOAD .

Together, researchers will address the basis of brain ageing by studying the pathways involved in Late-Onset Alzheimer Diseases combining integrative systems biology and comparative genomics. One of the first steps will be to identify the interactions through which the ageing phenotype develops in normal and in disease conditions; on this basis, novel pathways and their evolutionary properties will be modelled and experimentally tested in order to identify druggable targets. This work will finally allow the validation of new druggable targets and markers as a proof-of-concept towards the prevention and cure of aging cognitive defects.

Michel Simonneau, MD PhD, Professor at Ecole Normale Supérieure de Cachan, who coordinates this effort states that “this ambitious project integrates the numerous European initiatives, such as JPND1 , as well as national research programmes, which addresse the scientific and societal challenge of neurodegenerative diseases. This project receives the decisive input of 4 small to medium size enterprises (SMEs) that allow us to get candidate solutions for curing and preventing common age-related diseases. The links between academia and industry is the driving force of this work programme and in the end will hopefully benefit to all of us.”

The AgedBrainSYSBIO consortium is coordinated by the French National Institute for health and medical research (Inserm, Prof. Michel Simonneau) and brings together scientists with internationally recognized expertise in systems biology of the synapse and four small to medium size enterprises (SMEs) with a leading role in the project. The SME partners will assure translation of project results to clinical application.