Enhancement of chemotherapy by prevention of tumour cell repair

Chemotherapies are cancer treatments that work by inducing lesions in the DNA of tumour cells in order to inhibit their proliferation. However, the body naturally tries to repair these lesions, and thus reduces the efficacy of chemotherapy. Blocking the mechanisms for DNA repair would help to potentiate chemotherapy by reducing the resistance of cells to treatment. A team of researchers directed by Frédéric Coin, Inserm Research Director at the Institute of Genetics and Molecular and Cellular Biology (IGBMC) in Strasbourg (a Joint Inserm/CNRS/University of Strasbourg Research Unit), has discovered a new drug that inhibits repair: spironolactone, which seems likely to be used in the very short term as an adjuvant to chemotherapy.
Their results are published in
Chemistry & Biology.

UV rays, physical or chemical agents—the human body is constantly subject to environmental insults that cause more or less damage to our DNA. The body has therefore developed a whole system for proofreading and repair. Among these mechanisms, NER (Nucleotide Excision Repair) has been studied for several years by the researchers in a team led by Frédéric Coin and Jean-Marc Egly at IGBMC. This mechanism can thus detect a lesion, and then replace the damaged DNA fragment with an intact fragment.

Cytotoxic chemotherapy is aimed at blocking the division of malignant cells in order to prevent tumour growth. Included among the drugs used to treat many cancers such as colorectal, face and neck, testicular, bladder, ovarian and lung cancers are medications based on platinum. These drugs bind to cellular DNA, induce damage in the latter, and thus prevent its replication. Blocking DNA repair mechanisms, specifically NER activity, would help to potentiate chemotherapy by reducing the resistance of cells to the treatment.

The researchers at IGBMC therefore sought a drug that would inhibit NER activity. They thus tested over 1,200 therapeutic drugs and demonstrated the action of spironolactone, a drug already used for the treatment of hypertension, on NER activity. Specifically, the researchers showed that its action, when combined with that of platinum derivatives, caused a substantial increase in cytotoxicity for malignant colonic and ovarian cells.

Since spironolactone is already in use for other purposes, it does not require a new application for marketing authorisation, and its side-effects are already known. This result thus bodes very well for the rapid development of new chemotherapy protocols that include spironolactone. 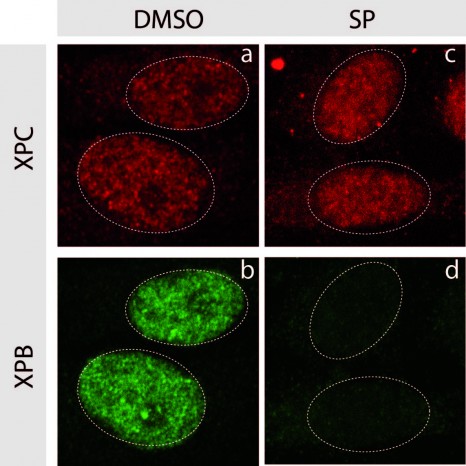 Immunofluorescence labelling, 1 h after treatment, of XPC proteins (in red) and XPB proteins (in green) involved in NER activity. On the right, treatment with spironolactone induces rapid degradation of XPB, which explains its inhibition of NER.