Platelets play a role in severe lung infections associated with flu viruses. This has been highlighted for the first time by a team of researchers from France’s National Institute for Agricultural Research (Inra), National Institute for Health and Medical Research (Inserm) and Claude Bernard (Lyon 1) University in their research published on 1 April 2015 in the American Journal of Respiratory and Critical Care Medicine. Their findings show that antiplatelet drugs are an effective support treatment for severe forms of flu.

Each year, flu epidemics are responsible for 3 to 5 million cases of serious illness worldwide and between 250,000 and 500,000 deaths, primarily among high-risk groups (the very young, the elderly and people with chronic illnesses). In severe flu cases, the lungs suffer excessive, damaging inflammation.

Researchers from Inra, Inserm and Claude Bernard (Lyon 1) University studied the role of platelets[1] during flu infections in mice. Their aim was to understand the mechanisms responsible for the excessive lung inflammation that occurs in the most severe cases. They discovered a mass influx of aggregated, activated platelets, highlighting for the first time the recruitment of platelets during processes linked to the severity of lung infections.

The same team then went on to demonstrate the link between platelet activation in the lungs and overactivation of inflammatory processes. When platelets are overactivated, mortality is higher. Conversely, mice with a platelet function deficiency were protected.

Lastly, the team demonstrated that antiplatelet agents had a beneficial effect on excessive lung inflammation. The researchers tested four different antiplatelet drugs on the mice (two of them already on the market) and three different strains of influenza virus. These were human strains modified to induce severe flu and pneumonia in the mice.

After a median lethal dose of virus was given (level that will kill 50%), antiplatelet agents administered locally or intranasally resulted in almost 100% survival.

This research therefore suggests that antiplatelet drugs, which already exist in the treatment arsenal, could be used to develop effective anti-inflammatory treatments for severe flu infections. These biological research results could lead on to clinical research to assess the possibility of achieving the same results in human beings. 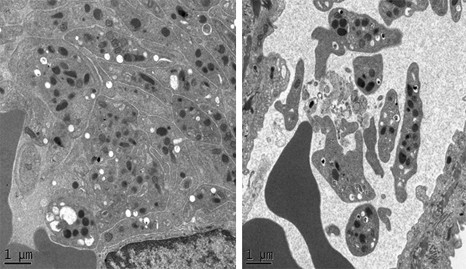 Lung tissue slices studied under an electron microscope. Mice infected with flu virus were treated intranasally with a solution containing an antiplatelet agent (right) or the solution without the agent (left). The formation of large masses of activated, aggregated platelets, as seen in the lungs of the control mice (left), was prevented in the mice given the antiplatelet agent (right), thus reducing inflammation and promoting survival. © Elisabeth Errazuriz-Cerda, CIQLE