Press release | 14 Nov 2014 - 11h24 | By INSERM PRESS OFFICE
Circulation, metabolism, nutrition
Imprimer
A research team bringing together José Cohen and Philippe Grimbert (Inserm Unit 955/Université Paris Est Créteil [UPEC] and the Centre for Clinical Investigation – Biotherapies 504 [CIC-BT 504]), and their collaborators at Institut Curie and AP-HP (George Pompidou European Hospital) has succeeded in finding a combination of drugs that reduces the risk of rejection following a skin graft. When tested in mice, this treatment seems effective, since no sign of rejection is observed nearly 30 days after transplantation.These results are published in the American Journal of Transplantation. 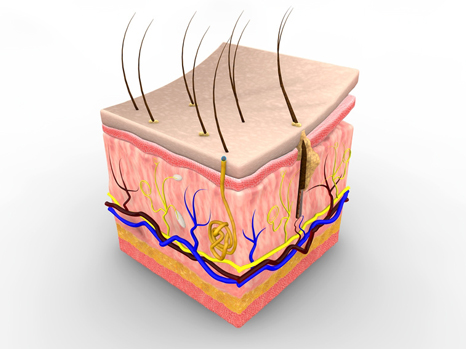 For physicians and researchers, a major challenge of transplantation is avoiding rejection of the transplanted organ or tissue by the recipient’s body. During allogeneic transplantation (i.e. of a graft from donor A into a different recipient, B), the immune system of the recipient recognises the graft as a foreign component. It then makes every effort to destroy it in the same way as it would, for example, destroy an infecting virus. To avoid this phenomenon, physicians administer immunosuppressive drugs to make the recipient’s immune system more tolerant. As with every treatment, there are drawbacks: the recipient’s vulnerability to infections is increased, and the treatment may have toxic effects on other organs (kidney). For the last 30 years, there has been little progress in this area of research. The optimisation of these treatments is therefore central to the current efforts.


Inserm researchers under the leadership of José Cohen became interested in a drug with special properties, namely the cytokine interleukin 2 (IL-2). This drug is already used in some treatments for cancer and type 1 diabetes. In cancer, administration of IL-2 in high doses increases antitumour activity by boosting the immune system. Interestingly, Eliane Piaggio, a co-author of this study, had shown that when administered at very low doses in type 1 diabetes, it has the opposite effect. IL-2 thus impedes the action of the immune system, which reacts too strongly against self in this disease.

Given that, in transplantation, the immune response is too strong, the researchers hypothesised that administration of IL-2 might impede the action of the immune system (by analogy with its action in type 1 diabetes), and might therefore reduce graft rejection.

“Our initial experiments proved negative: IL-2 used alone did not give the expected results,” explains José Cohen. “We had to redirect our efforts and our attention to the specific functioning of 2 types of cells from the immune system, namely the regulatory T lymphocytes controlled by IL-2, and the “classical” T lymphocytes.”

The immune system is composed of several categories of cells, each with a specific role in maintaining its balance: it must not be too aggressive or too tolerant. Generally, regulatory T lymphocytes, as their name indicates, act on the other populations of classical T lymphocytes to prevent them from over-reacting. Hence the initial idea of boosting their activity via IL-2. However, this strategy turned out to be inadequate.

“Skin grafting in mice is the most difficult experimental model to control. In our experiment, mice show no sign of rejection 30 days following a skin graft. This is very encouraging when we know that this rejection usually occurs in 10 days: the tissue becomes irreversibly necrotic.”

These results are a first step before clinical evaluation. An advantage of these two drugs is that they have marketing authorisation for use in humans. If the next steps are successful, especially in the liver transplant model, their use in the area of transplantation (any kind of transplantation) might soon begin.