Beginning of life: how does symmetry come into play?

The first embryonic division, which follows gamete fusion (oocyte and spermatozoon), starts the development of a new individual, the genesis of a functional adult body. This division is symmetric in the one-cell embryo stage (also known as the zygote); it leads to the formation of two daughter cells of identical size. Conversely, it is asymmetric in the oocyte, which has the same size and shape as the zygote. Why? What directs the zygote to divide symmetrically, while the oocyte divides asymmetrically during meiosis? Such are the questions pondered by Marie-Emilie Terret, a researcher at Inserm, and Marie-Hélène Verlhac, a researcher at CNRS and director of the Asymmetric Divisions in Oocytes team at the Center for Interdisciplinary Research in Biology (CIRB; Inserm/CNRS/Collège de France)[1]. By combining biology, physics and mathematics, the researchers succeeded in demonstrating, in mice, the regulatory mechanics that determine, in a very short time, the geometry and hence the fate (symmetric or asymmetric division) of the cell. In future, the elements arising from this work may contribute to improving the efficacy of in vitro fertilisation.

Details of these results are published today in the journal Nature communications.

At the one-cell stage, the embryo very closely resembles an oocyte: a round, isolated cell, similar in size to an oocyte. The geometry of a cell’s division is determined by the position of the microtubule spindle, the machinery that carries and separates the chromosomes. In most animal cells, the centrosomes organise the microtubule network, which is essential to the formation and positioning of the division spindle. But oocytes and zygotes lack centrosomes. A major difference between these two types of cells, however, lies in the geometry of their divisions. Indeed, during meiosis oocytes divide in an extremely asymmetric manner in terms of size, allowing the formation of a single enormous oocyte and the expulsion of “polar bodies” containing the excess genetic material. Conversely, the zygote divides in a perfectly symmetric manner, leading to the formation of two daughter cells of identical size. 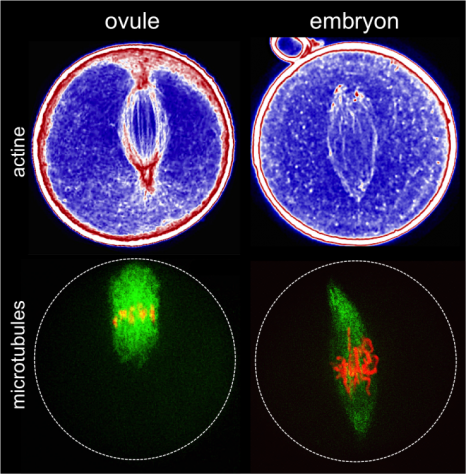 Three steps are required for this symmetric division:

The mechanics of actin/myosin networks therefore make it possible to change from an asymmetric division to a symmetric division, a change in geometry needed for the transition from oocyte to embryo.

The research team is already formulating hypotheses regarding the mode of action of actin, which plays a role in the physical characteristics of the cell membrane (rigid or soft), which in turn influence the geometry of division. “Our next work will involve the more detailed study of interactions between actin and microtubules in an attempt to understand their respective roles in the architecture of the cell at the moment of division, and the potential involvement of other intermediary proteins,” explains Marie-Emilie Terret.

A better understanding of the physical characteristics and behaviour of the oocyte during division, whether fertilised or not, has the potential to contribute useful new elements to medically assisted conception. During in vitro fertilisation (IVF), for instance, the storage temperature of the oocytes can have an impact on the quality of the actin networks, and consequently affect division, and hence the formation of a zygote.

Increasing the efficacy of IVF might therefore represent a long-term objective for this research team, one of the few in France working on this theme.

[1] In collaboration with researchers from the Laboratory for Analysis and Modelling for Biology and Environment (LAMBE; CNRS/CEA/University of Évry Val d’Essonne/Cergy Pontoise University), the Theoretical Physics of Condensed Matter Laboratory (LPTMC; CNRS/UPMC) and the Curie Physical Chemistry Laboratory (CNRS/Institut Curie/UPMC).

TO CITE THIS POST :
Press release – Inserm press room Beginning of life: how does symmetry come into play? Link : https://presse.inserm.fr/en/beginning-of-life-how-does-symmetry-come-into-play/21898/