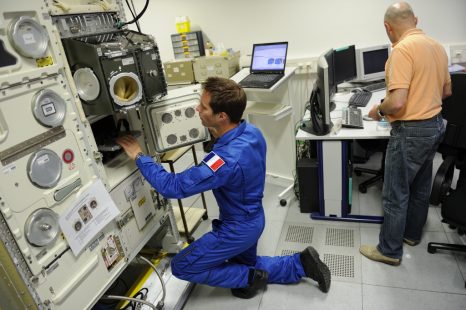 Space is an extraordinary laboratory for medicine and medical research on Earth. That is why Inserm and the CNES have been working together for more than a year[1] to accelerate research progress to improve the health of all of us. The presence of Thomas Pesquet, French astronaut from the European Space Agency (ESA), on board the International Space Station (ISS) for 6 months gave rise to many experiments, the preliminary results of which support the researchers’ hypotheses and sometimes even surprise them.

Thomas Pesquet will present these discoveries at an exceptional session organized by the French Academy of Sciences, to be held under the dome of the Institut de France on October 10, 2017.

In space, the muscles, bones, arteries, sensory organs, nervous system and immune system suffer under conditions of weightlessness and acceleration to which they are not adapted. Why? Evolution has optimized the human body to respond to Earth’s gravity and to live beneath the protective layer of the atmosphere. When the restriction of gravity is suddenly removed and when the body is exposed to cosmic radiation and heavy elements, it can experience specific and hitherto unknown problems. Furthermore, the body must deal with stressful conditions, restricted movement, little dietary variation and disruption of the internal body clock.

In the face of these observations, researchers from Inserm and CNES have rallied to:

On medical and physiological data

On board the station, monitoring the astronauts is a daily challenge. The EveryWear system, developed by CNES health subsidiary MEDES, offers a new approach with a personal assistant for astronauts to use in the form of a simple touchscreen tablet application. It comprises a set of wearable biomedical sensors with Bluetooth connection to a mobile terminal (in this case a conventional tablet).

The use of a tablet to collect a series of different types of information is a major advance in terms of the medical, physiological and personal data of an astronaut. The main advantages of EveryWear are its capacity to aggregate data from various tools and its simplification of the astronauts’ procedures. It is an adaptable system that can cover a broad spectrum of needs: nutrition, sleep, study of the cardiovascular system, with data collection adapted for harmonized processing. Here also, the time the personal assistant saves for the team is considerable. For example, in the past, the astronaut’s nutritional monitoring meant he had to answer questionnaires each time he consumed food. Now, the data are transmitted directly.

Inserm Unit 1075 in Caen is working on miniature actimetric and temperature sensors with the company BodyCap. These sensors and the corresponding analysis software have been incorporated in the on-board assistant of Thomas Pesquet’s flight, particularly for the evaluation of sleep and circadian rhythms. The initial findings, which must be taken with caution as they are derived from the analysis of just one person’s data, are quite unexpected. They show that, despite the strong gravitational influence on body movements – and therefore on the actimetry – the relationships between the actimetric data and the state of vigilance (waking/sleeping) are the same on board the ISS as they are on Earth. Confirmation of this result would facilitate the medical and physiological monitoring of astronauts.

Since the monitoring of physiological and environmental data is a key determinant in the new domain of personalized medicine, improving these devices could have many impacts. For example, these results could be used to help improve connected watches whose sensors (sleep trackers) evaluate sleep in accordance with movement and the reorientation of the wrist during the night, themselves dependent on gravity.

The team of Laurence Vico, Research Director at Inserm Unit 1059, is studying the changes that space flights induce in bone structure. To analyze the structure of the radius and tibia, the experiments use a high-resolution scanner (developed with the help of the European Space Agency). In addition to measuring bone mineral density, this equipment is also used to perform non-invasive “virtual bone biopsies”, enabling a very precise 3D view of the bone architecture.

While it is forbidden to disclose the individual results of the measurements taken from Thomas Pesquet, those from a larger cohort of 13 astronauts not only show that the weight-bearing bones (in the legs) fail to regain the same quality as prior to the flight into space but -and this is a new finding- it would seem that the non-weight-bearing bones (in the arms), which are preserved at the time of return to Earth, progressively deteriorate.

Comparison of these results with those obtained in mice shows that the cells responsible for orchestrating bone formation and resorption activities (osteocytes), and which normally live for several years, die prematurely when subjected to conditions of weightlessness. A countermeasure able to act on this premature aging, and which could be used in osteoporosis patients, is being tested.

Pierre Boutouyrie conducts research at Inserm Unit 970. It is one of the first laboratories to have worked on the consequences of the conditions of microgravity or hypergravity, especially on the accelerated aging of our arteries. Space flights are good models in which to study this. With aging, we know for example that arteries lose flexibility, they lose their ability to act as shock absorbers of blood flow and that they are exposed to atherosclerosis which can lead to harmful effects on the heart, brain and kidneys.

For Thomas Pesquet’s flight, the changes related to microgravity were studied by fitting flexible piezoelectric sensors[2] that were linked to the astronaut’s onboard assistant. Again, the individual data cannot be disclosed here but the initial results of a bed-rest study conducted for 2 months in 10 patients, in addition to astronaut data published by an international team show that very rapid and very substantial arterial system remodeling occurs, reflecting its accelerated aging. These consequences are not just suffered by astronauts but also long-term bedridden patients.

Right now, researchers are testing countermeasures related to diet and physical activity in order to attenuate these effects in bedridden patients.

Watch the presentation of these discoveries by Thomas Pesquet, broadcast live from under the dome on the site of the Academy of Sciences!

On December 6, 2016, the Academy of Sciences opened its doors to over 300 high school students and their teachers. A live link-up from the ISS was organized in their honor, with Thomas Pesquet.

On October 10, 2017, Thomas Pesquet will return, in person, beneath the Dome of the Institut de France to tell us about his life in a research laboratory in space, and present the results of the scientific experiments developed by CNES and Inserm under the auspices of NASA and ESA.

To view the live broadcast online on October 10 from 3 p.m. (French time): http://www.academie-sciences.fr/fr/Ceremonies/seance-thomas-pesquet-2017.html

[1] https://presse.inserm.fr/espace-et-sante-le-cnes-et-linserm-signent-un-accord-cadre-a-lelysee/25039/ [Space and Health: In the Presence of the President of France, CNES and Inserm Sign a Framework Agreement at the Elysée Palace (in French)]