Bisphenol A: Alternative products that may also be harmful

Bisphenol F and bisphenol S, which are used as substitutes for bisphenol A in certain applications, have the same negative effect on human foetal testes as bisphenol A. This has recently been shown by René Habert and his colleagues at the Joint Research Unit 967 “Stem Cells, Radiation and Genetic Instability” (CEA/Inserm/Paris Diderot University)[1] using the same in vitro method that allowed the team to analyse the negative effect of bisphenol A on the testis in 2012[2].

These results are online at the Fertility and Sterility journal website.

The manufacture and sale of babies’ feeding bottles containing bisphenol A have been banned in Europe since January 2011. In addition, the manufacture, export, import and marketing of all food packaging containing bisphenol A is banned in France from January 2015. Alternative products, bisphenol S and bisphenol F, are currently being studied or are already in use. Even though their chemical structure is similar to bisphenol A, the safety of these products has never been tested in humans and other mammals and no regulations currently exist concerning this. 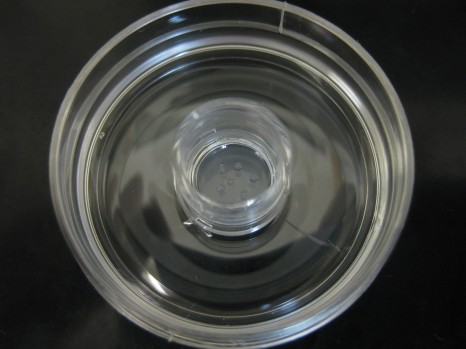 To assess the harmful effects of endocrine disruptors[3] on the testis development during foetal life, Réné Habert and his colleagues at the Laboratory of Development of the Gonads (UMR 967 – “Stem Cells, Radiation and Genetic Instability” – CEA/Inserm/Paris Diderot University) have been using an original experiment system for several years, which they have developed and named the Fetal Testis Assay (FeTA)[4]. This method allows foetal testes to be kept in a petri dish for several days to assess the effects of the addition of different chemicals on their development and function. Thanks to this method, the researchers provided the first experimental proof that bisphenol A inhibits the production of testosterone in the human foetus. A concentration equal to 2 micrograms per litre of bisphenol A in the culture medium was sufficient to produce these effects This concentration is equal to the average concentration generally found in the blood, urine and amniotic fluid of the population.

Researchers have used the same culture system in this new study, the results of which were published in the Fertility and Sterility journal. They observed that the exposure of human foetal testes to bisphenol S or bisphenol F reduces the production of testosterone that is identical to the reduction caused by bisphenol A. It is the first time bisphenol S and F have been shown to have a harmful effect on physiologic function in humans.

Bisphenol A is a chemical compound that is included in the composition of plastics and resins. It is notably used in the manufacture of food containers and is also found in the protective films used inside food and beverage cans. Several studies have shown that this component has harmful effects on reproduction, metabolism and the brain. The full impact of bisphenol A occurs during foetal life.

[1] CEA-IRCM (Institute of Molecular and Cellular Radiobiology), Fontenay-aux-Roses CEA centre.[2] Press release 17.01.2013 – L’effet néfaste du bisphénol A prouvé expérimentalement (Harmful Effects of Bisphenol A Proven Experimentally) (Plos One, December 2012)[3] A substance or mixture not produced by the body that alters the function(s) of the endocrine system and consequently causes adverse health effects in an intact organism, or its progeny, or sub-populations.[4] In collaboration with the Antoine-Béclère Hospital in Clamart.

TO CITE THIS POST :
Press release – Inserm press room Bisphenol A: Alternative products that may also be harmful Link : https://presse.inserm.fr/en/bisphenol-a-alternative-products-that-may-also-be-harmful/17460/