Is there a relationship between blood group and the risk of developing type 2 diabetes? This is the question studied by Guy Fagherazzi and his collaborators from Joint Research Unit 1018, “Centre for Research in Epidemiology and Population Health” (Inserm/University Paris-Sud) at Gustave Roussy Institute. The analysis, carried out on 82,104 women from the E3N cohort who were monitored for 18 years, suggests for the first time that the risk of type 2 diabetes may be lower for individuals with blood group O than for those with blood groups A, B or AB.

These results are published in the journal Diabetologia. 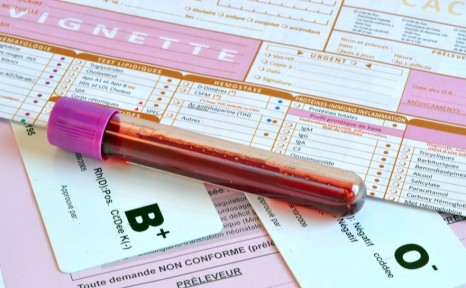 Diabetes affects more than 382 million people worldwide, 90% of whom have type 2 diabetes. Approximately 4.6% of the French population is affected by this disease, and the figure continues to grow. Known risk factors are obesity, lack of physical inactivity, excessive caloric intake, smoking, hypertension and hypercholesterolaemia. The researchers believe that it is now crucial to identify new factors that will make it possible to understand this disease and thereby slow its development.

“We show, for the first time in such a large population, that women with blood group O—approximately 43% of French people presently have this group—have a lower risk of developing type 2 diabetes,” explains Guy Fagherazzi, an epidemiologist at Inserm.

More specifically, women with other blood groups had an increased risk of developing diabetes, going from 10% for group A, to 17% for group AB, and 21% for group B, compared with group O.

When the individual’s Rhesus factor was taken into account, the researchers noted that women with blood group O- (only 6% of the French population) had a lower risk of diabetes than the others.

How can these results be explained?

At present there are few biological mechanisms that make it possible to link blood group to the risk of type 2 diabetes, but some hypotheses already identified might partly explain the observed association:

“Despite the robustness of our data, it is necessary to replicate this study in other large populations, especially populations with other genetic backgrounds, and in men, even though the mechanisms proposed are not sex-dependent,” says Guy Fagherazzi, first author of the study.

If these observations are confirmed, it might be relevant to collect blood group information in routine practice, in future studies regarding type 2 diabetes, and when monitoring people at risk. The researchers will need to determine why individuals with blood group O are at lower risk of developing type 2 diabetes.

Since 1990, women have completed and returned a self-administered questionnaire every 2-3 years. They are asked both about their lifestyle (diet, use of hormone treatments, etc.) and about changes in their state of health.

Data on risk factors have been the subject of several validation studies. The rate of “loss to follow-up” is very low, because MGEN offers the possibility of following up nonrespondents. However, it is mainly thanks to the loyalty and reliability of the participants and the collaboration of treating physicians that the E3N study can provide all these results.

The E4N study has just been launched, and is aimed at extending the E3N study by monitoring family members of E3N women. Ultimately, E4N will include three generations: E3N women and the fathers of their children constitute the first generation; their children, the second; and their grandchildren will form the third generation. Monitoring the three generations will make it possible to collect information on behavioural and environmental factors at different periods of life. The main objective of the E4N study is to study health in relation to environment and modern lifestyle in subjects from the same family with a shared genetic background and environment.