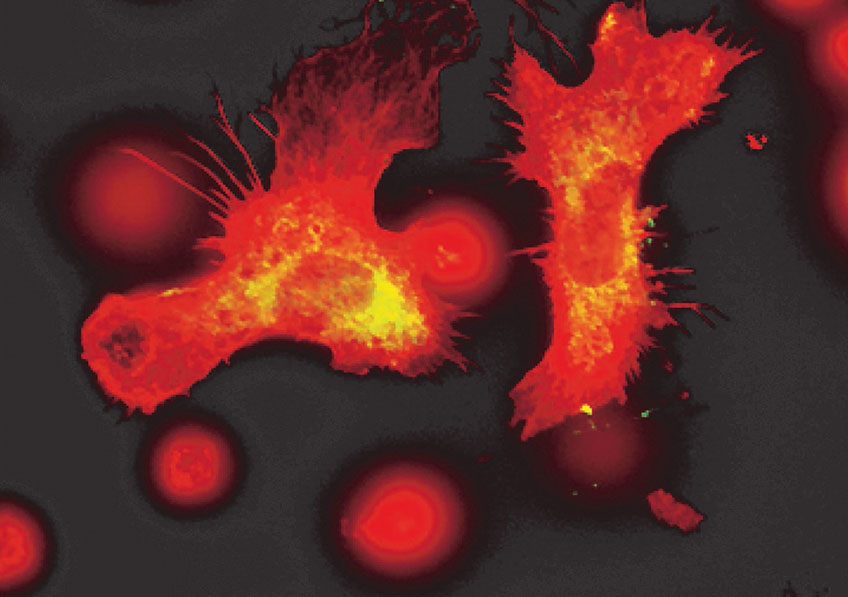 Immune cells seen by fluorescence microscopy. Blood immune cells store information from past infections and then produce more immune cells like the macrophages captured in this image.© Sieweke lab/CIML.

Blood stem cells have a surprising ability. In addition to ensuring the continuous renewal of blood cells, they keep track of past infections so that faster and more effective immune responses can be triggered in the future. This is according to a new study co-led by Inserm researcher Sandrine Sarrazin and CNRS researcher Michael Sieweke at the Center of Immunology Marseille-Luminy (CNRS/Inserm/Aix-Marseille Université, France) and the Center for Regenerative Therapies Dresden (Germany). This discovery could have a significant impact on future vaccination strategies, particularly those being explored for COVID-19, and also further research into new treatments that modulate the immune system. These findings have been published in Cell Stem Cell.

It has long been known that the adaptive immune system has a memory. Following exposure to an infectious pathogen, lymphocytes in the blood become specific to it, with some of them remaining in the body long-term. The principles of vaccination are based on the knowledge of these immune mechanisms.

To verify this hypothesis, scientists at the Center of Immunology Marseille-Luminy (CNRS/Inserm/Aix-Marseille Université) and the Center for Regenerative Therapies Dresden (Germany) carried out research whose findings have been

published in Cell Stem Cell. The researchers began by exposing mice to a molecule found on the surface of the E. coli bacterium (lipopolysaccharide or LPS), a pathogen which is commonly used in laboratories to mimic infections.

They then transferred blood stem cells taken from these animals to non-infected mice whose immune systems had previously been destroyed. The aim was to fully reconstitute their immune systems based on these stem cells.

The researchers then infected mice from this group with a live bacterium of the species P. aeruginosa, observing a mortality rate of just 25%. However, in the control mice whose stem cells had never been exposed to a pathogen, this rate was 75%.

“This research strongly demonstrates that the blood stem cells have a memory function that we did not know existed. Initial exposure to a pathogen makes them better equipped to face subsequent infections”, explains Sandrine Sarrazin.

This mechanism is not specific to pathogens because, in another experiment, an initial exposure of the blood stem cells to a viral antigen protected the mice from secondary exposure to P. aeruginosa. The scientists made the surprising discovery that the protection afforded by this immune system memory extends beyond the infectious agent used for the first infection.

The researchers then looked at how this memory is coded. When studying the genome of the blood stem cells of the infected mice, they observed lasting modifications in its spatial organization. Changes that are likely to modify the expression of some genes implicated in the innate immune response. “At the time of first contact with the pathogen, genes required for the immune response are in fact put forward long-term so as to rapidly activate the immune system in the event of a second infection”, explains Bérengère de Laval, lead author of the study. Finally, the team looked for molecules implicated in this change of genome structure and discovered that the protein C/EBP beta played a major role.

These results are particularly relevant during this period of SARS-Cov-2 coronavirus pandemic.

Recent findings suggest that the BCG vaccine – it too known for inducing innate immune memory – also acts at blood stem cell level and offers a certain degree of protection from respiratory infections. Studies are ongoing in order to test its utility against COVID-19.

The team’s discoveries could elucidate the molecular mechanisms at play in this protection and open up new avenues for vaccines – particularly against COVID-19.

“Our discoveries represent a major contribution to understanding immune system memory and blood stem cell functions. They also point towards new strategies for stimulating or limiting immune response in various disease states and could make it possible to refine current vaccination strategies for better protection from various pathogens, including SARS-CoV-2″, hopes Michael Sieweke.