Brain and spatial attention: Can the left hemisphere compensate for a lesion in the right hemisphere?

Dr Paolo Bartolomeo, Inserm Research Director and head of the PICNIC LAB[1] team at the Brain and Spinal Cord Institute (ICM, an Institute supervised by Inserm, CNRS and UPMC) and his collaborators have published the results of their research on “unilateral spatial neglect,” also known by the term “hemineglect,” in the journal Brain. People with this disorder act as if they did not know about the left side of their world. This disorder occurs primarily after an injury to the right cerebral hemisphere, for example following a stroke (cerebrovascular accident or CVA), and exacerbates the resulting disability by impeding rehabilitation and recovery. The scientists therefore searched for factors predicting the persistence of this disorder, in order to offer patients appropriate rehabilitation.

The published study shows that the two hemispheres can partially compensate for one another in the event of an injury, through incompletely understood mechanisms known as “brain plasticity.” However, results suggest that this compensation requires both hemispheres to “speak to one another” via intact connections—bundles of white matter formed by extensions of the neurons.

In the acute phase of a stroke affecting the right hemisphere, the vast majority of patients show signs of left-sided neglect (since the left side of our body is controlled by the right hemisphere and vice versa). These patients behave as if the left side of their world no longer existed. They do not eat food from the left side of their plate, they collide with furniture located on their left, and do not shave or apply make-up to the left side of the face. They also recover less well from their motor deficits than patients affected in the left hemisphere. Some of them recover with time, but spontaneous improvement of neglect is far from being the rule: at least one-third of patients showing this disorder in the acute phase continue to show signs of it over a year after acquiring their lesion. This highlights the clinical imperative to identify factors that predict the persistence of negligence, in order to offer appropriate rehabilitation to patients for whom this disorder risks becoming chronic.

Dr Paolo Bartolomeo and his collaborators monitored changes in neglect over time in 45 patients with vascular lesions in the right hemisphere. Advanced magnetic resonance imaging methods made it possible to study the condition of the fibres in the white matter that enable the different regions of the brain to communicate with one another, as well as the two hemispheres. All neglect patients had damage to the lines of communication between the anterior and posterior parts of the right hemisphere; patients with persistent neglect lasting one year after acquiring the lesion also showed damage to the posterior part of the corpus callosum, the connection that allows the two cerebral hemispheres to communicate with one another. The (healthy) left hemisphere must therefore be able to communicate with the injured (right) hemisphere, in order to learn to compensate for the visuospatial defects provoked by the brain lesion. Patients with damage to the corpus callosum are at risk of developing chronic neglect, and should therefore have priority access to rehabilitation treatments. 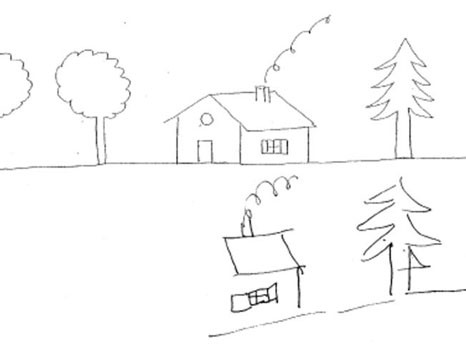 A patient with spatial neglect fails to copy the elements located on the left side of a picture. © PICNIC LAB – ICM

TO CITE THIS POST :
Press release – Inserm press room Brain and spatial attention: Can the left hemisphere compensate for a lesion in the right hemisphere? Link : https://presse.inserm.fr/en/brain-and-spatial-attention-can-the-left-hemisphere-compensate-for-a-lesion-in-the-right-hemisphere/17606/

Cannabis use can lead to behavioral changes, including reduced social interactions in some individuals. To better understand the phenomenon, Inserm researcher Giovanni Marsicano and his team from NeuroCenter Magendie (Inserm/Université de Bordeaux), in collaboration with Juan Bolaños' team from the University of ...