Throughout life, extremely heavy demands are made on the spinal column. Spinal wear very soon affects the quality of life, and back pain is often described as the illness of the century. 40% of back pain may be due to irreversible deterioration of the intervertebral discs (which act as “cushions” between the vertebrae), which can no longer play their role as shock absorbers. Researchers from Inserm led by Jérôme Guicheux (Inserm Unit 791, “Laboratory of Osteoarticular and Dental Tissue Engineering,” Nantes) have successfully transformed adipose stem cells into cells that might be able to replace damaged discs. This work is published in the journal Stem cells.

Our spinal column is made up of a stack of vertebrae. Its articulation and flexibility are made possible by the presence of intervertebral discs that form “cushions” between the vertebrae. Degenerative diseases of the vertebral discs are related to the strong and repetitive demands made on the spinal column throughout life—carrying loads, sports, repetitive movements and twisting motions. With time, the discs become worn and deteriorate, and can no longer play their role as shock absorbers. Although these conditions appear slowly and progressively, they soon manifest as pain in the area where the discs are damaged. It is estimated that degeneration of the intervertebral discs is responsible for approximately 40% of lumbar pain. Current research is therefore aimed at developing treatments to slow or prevent the degeneration of the discs and the cells that constitute them.

From a physiological standpoint, the nucleus pulposus, the central part of the intervertebral disc, is the first to be affected. It is largely made up of water, which gives it its shock-absorbing properties. With age, the cells of the nucleus pulposus gradually become less proliferative, and are then subject to apoptosis and unable to produce this famous highly hydrated extracellular matrix.

How then can they be replaced with functional cells? The researchers focused on the adipose tissue, which constitutes a large reservoir of stem cells that can differentiate into a vast array of cell types. It was also necessary to find the right protocol to successfully enable stem cells from the adipose tissue to become transformed into nucleus pulposus cells.

The development of this protocol can be compared to a food recipe. The researchers were able to find the right ingredients and correct proportions for it to succeed. The winning strategy involved adding a combination of two growth factors, TGFβ and GDF5, to the cell medium. In 28 days the researchers obtained in vitro, from adipose tissue taken from nine patients, functional nucleus pulposus cells resembling those that exist naturally in the intervertebral discs.

However, we had to go further, since these cells had no chance of survival if they were merely reimplanted into a damaged intervertebral disc, without all the nutrient substrate they need.”

The second trick was therefore to couple these cells to a synthetic biomaterial to recreate a favourable environment for their multiplication once they had been injected into the intervertebral disc. The researchers assessed the biological activity of these cells in vivo after transplanting them into mice. “This system most closely resembles intradiscal transplantation in humans. We have demonstrated that the protocol we apply to these cells was sufficient for them to retain their specific secretory activity and their specialised phenotype when reinjected in vivo.”

This work in regenerative medicine now allows the researchers to contemplate the next step before moving to the clinical setting: testing the therapeutic efficacy of these brand-new cells in a relevant animal model of degenerative vertebral disc disease. 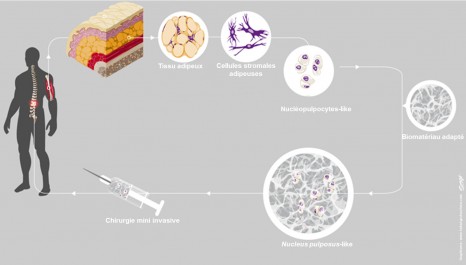