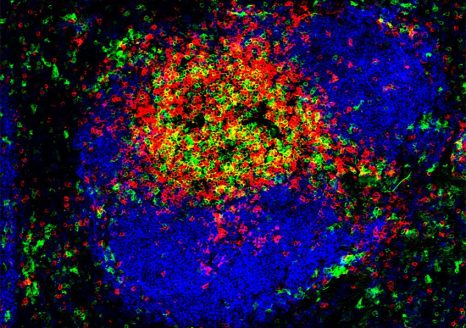 Recent studies have shown that Mycobacterium ulcerans infection causes the aggregation of immune cells (B cells) around the infected areas. Using fluorescent staining, a mouse spleen section shows B cells (in blue) and two sub-populations of T cells (in green and red). Credits: CIML/INSERM/CNRS/Mailfert, Sébastien/Chasson, Lionel

Buruli ulcer is the world’s third most common tropical mycobacterial disease after tuberculosis and leprosy. Caused by Mycobacterium ulcerans, it leads to the destruction of skin tissue and the development of large ulcers which can affect entire limbs right down to the bone. Researchers from Inserm, Université de Nantes, Université d’Angers and CNRS at the Nantes-Angers Oncology and Immunology Research Center (CRCINA) studied the rare cases of spontaneous healing from this disease in order to better understand its mechanisms. In addition to publishing their findings in the journal Science Advances, the team has filed a patent, opening up avenues for the deployment of hitherto inexistent diagnostic tools.

Buruli ulcer is a disease caused by Mycobacterium ulcerans (M.ulcerans), whose mode of transmission to humans is still not known. This bacterium produces a toxin called mycolactone which destroys skin cells and prevents the immune system from mounting an effective response, leading to the propagation of disease-characteristic ulcers on the limbs. Incapacitating and stigmatizing, Buruli ulcer affects children and adolescents most particularly. This little-known this disease is especially prevalent in West and Central Africa and has a very poor diagnostic and therapeutic arsenal. The World Health Organization (WHO) has classified it as a neglected tropical disease. Antibiotic treatment is effective if the disease is diagnosed quickly, although this is not yet possible in the majority of cases.

As part of a study published in Science Advances[1], a team led by Inserm researcher Estelle Marion at Nantes-Angers Oncology and Immunology Research Center (Inserm/Université de Nantes/Université d’Angers/CNRS) used mice to investigate the phenomenon of spontaneous healing that is observed in around 5% of infected patients.

Until now, research into Buruli ulcer focused on whole-body immune response. However, recent skin tissue studies have revealed that Mycobacterium ulcerans infection causes the aggregation of immune cells (B cells) around the infected areas. With this in mind, the researchers decided to focus on local immune response, at the site infected by the bacterium.

B cells produce a family of antibodies known as immunoglobulins (Ig). The major subgroups are IgA – found mainly in the mucous membranes and epidermis, IgM – present on the surface of the lymphocytes and for which a high count is synonymous with an ongoing infection, and IgG – the most numerous, which circulate primarily in the blood and eliminate foreign bodies encountered there.

Towards a diagnostic avenue

The researchers worked with two types of mice – one with the ability to spontaneously heal from Mycobacterium ulcerans infection, the other without. They began by studying immune reaction during infection, including during the spontaneous healing process, by analyzing skin samples from the area close to the infected site.

The researchers showed that these IgG bind to the toxin mycolactone. They went on to discover that only the mice that heal produce a very particular sub-type of IgG, IgG2a – capable of neutralizing the action of mycolactone. Finally, the researchers discovered the presence of the latter in the tissues of patients infected with M. ulcerans.

“This study suggests for the first time that the body could efficiently respond to Mycobacterium ulcerans infection thanks to the production of antibodies that are capable of recognizing and neutralizing the toxin secreted by the mycobacterium. Although therapeutic avenues are still a long way off, this research offers new diagnostic ones”, concludes Inserm researcher Estelle Marion, who led this study.

According to the priorities issued by WHO, the team is envisaging the development of a quick and simple diagnostic test strip, based on the detection of antibodies recognizing mycolactone, thereby indicating M. ulcerans infection.