Why not fight the influenza virus by blocking the cellular machinery it uses for replication? Researchers from Inserm (Unit 1100, “Respiratory Pathologies: Proteolysis and Aerosoltherapy”), Institut Pasteur and the HKU-Pasteur Research Pole in Hong Kong tested this hypothesis by specifically targeting the calpains, proteases involved in inflammatory mechanisms. Their results, obtained in animals, show that inhibiting these enzymes can not only reduce the symptoms of the disease, but also prevent infection by seasonal or pandemic influenza viruses.

Results of this study were published in the American Journal of Physiology, Lung Cellular and Molecular Physiology in January 2016. 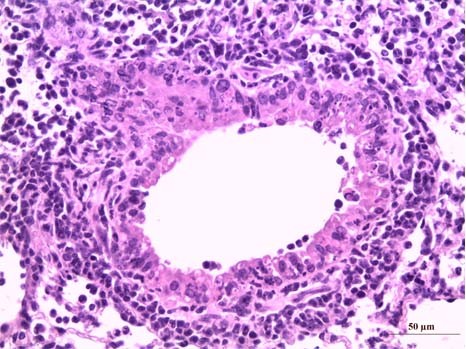 The clinical consequences of influenza are mainly the result of uncontrolled inflammation of the lung tissue, which can lead to severe or even fatal damage. The Respiratory Pathologies: Proteolysis and Aerosoltherapy research centre and associated teams showed that this inflammatory process could be inhibited by blocking calpains, proteases present in the host cells. Blocking these enzymes might play a key role in fighting influenza: in mice, inhibition of calpains makes it possible to limit infection caused by seasonal (H3N2) or pandemic (H5N1) influenza virus.

“Two calpains are ubiquitously expressed in the body, calpain 1 and calpain 2,” explains Mustapha Si-Tahar, Director of Inserm Unit 1100. “They are being intensively studied, since they play a considerable role in various physiopathological processes, such as neurodegeneration, muscular dystrophy and diabetes. The various studies that allowed their functions to be deciphered have shown that these proteases also play a role in the inflammatory cascade, by a calcium-dependent mechanism. The influenza virus increases the intracellular calcium level and the inflammatory response.”

The work carried out by his team shows that calpains are activated during influenza infection. Conversely, inhibiting them reduces the virus’s ability to replicate in respiratory epithelial cells—whether these are murine or human.

It also reduces the intensity of the harmful immune response, and increases the survival rate of the infected host.

These results provide new perspectives in influenza control: blocking the host cell machinery would indeed be an attractive option, since it would limit the selective pressure of influenza treatments, and hence the emergence of resistant strains of the virus. The challenge is considerable: seasonal influenza is a public health problem, with 2,500-3,500 deaths in France each year. Furthermore, some influenza epidemics can lead to high excess mortality, such as in 2015, with more than 18,000 deaths recorded on the territory, and influenza pandemics can have even more serious consequences, like the Spanish influenza that killed over 50 million people between 1918 and 1919.

The researchers now want to explore two aspects in greater detail: the respective roles of the two forms of the enzyme, and the exact nature of the molecular mechanisms controlling the interaction between calpains and the influenza virus. This work will make it possible to confirm the therapeutic potential of calpains.

COVID-19: Together, Remdesivir and Diltiazem Open up New Therapeutic Avenues

As the COVID-19 pandemic continues, finding a treatment to effectively combat the disease remains a major research challenge. Researchers from Inserm, CNRS, Université Claude Bernard Lyon 1 and ENS Lyon at the International Research Center for Infectious Diseases have developed a unique ...