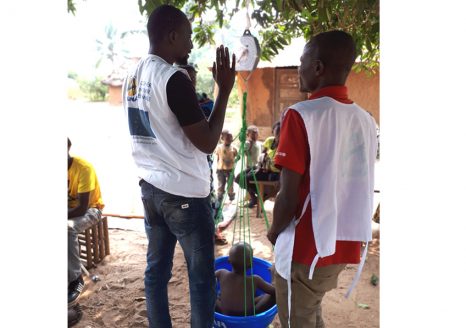 Weighing of a child being screened in the community for acute malnutrition as part of the OptiMA-DRC clinical trial, Kasaï Province, Democratic Republic of the Congo. © ALIMA

Malnutrition affects millions of children worldwide, and has been made worse by the COVID-19 health crisis. In a new study, researchers from Inserm and Université de Bordeaux at the Bordeaux Population Health Research Center, in collaboration with the Research Institute for Sustainable Development (IRD) and the NGO ALIMA (The Alliance for International Medical Action), have developed and tested a new strategy to simplify and optimize the treatment of malnutrition in order to help a larger number of children. Called OptiMA, a randomized, clinical trial conducted in the Democratic Republic of the Congo has shown this strategy to treat 30% more children while using 20% less nutritional products than in standard programs. These findings were published on March 16, 2022 in The Lancet Global Health.

In 2019, malnutrition affected 47 million children under 5 years of age. Although all of the world’s regions were affected, a quarter of the children were in Africa. After two years of the COVID-19 pandemic and its attendant health system disruptions and increased food insecurity in many countries, the situation is far from improving.

In severe acute malnutrition, “ready-to-use therapeutic food” is used. The amount given is calculated according to weight, with the dose increasing as the child gets closer to their normal weight, despite it appearing more logical to decrease the dose as the child recovers.

Children with moderate acute malnutrition receive a different product with a similar composition, known as “ready-to-use supplementary food”. Both types of product are brought into the countries concerned through different supply channels overseen by different United Nations agencies, thereby complicating the care of children on the ground. What is more, these nutritional products, along with the attendant human resources, account for the highest proportion of the costs of the programs aimed at fighting acute malnutrition.

At a time when these programs face a significant lack of funding, simplifying and standardizing the treatment of all types of malnutrition is a priority in order to increase efficacy, reduce costs, and ultimately help more children. At present, only 25% of the children estimated to be severely malnourished are receiving treatment.

Researchers from Inserm, Université de Bordeaux and the Research Institute for Sustainable Development (IRD), and humanitarians from the NGO ALIMA have pooled their expertise to develop and propose an evaluation methodology and implement a clinical trial to evaluate a new strategy called “OptiMA”, in which children suffering from acute malnutrition, regardless of the stage of the disease, receive one type of nutritional treatment – namely ready-to-use therapeutic food – at a dose that progressively decreases as the child improves.

By proposing the use of one type of product for all forms of acute malnutrition, and by optimizing the dose, the scientists hoped to be able to treat children more simply and in greater numbers, while preventing the development of the severest forms of malnutrition.

Their study, conducted in the Democratic Republic of the Congo, included nearly 1,000 malnourished children between 6 months and 5 years of age, recruited from four health zones in the Kasaï Province, composed of some 60 villages and four health centers. The study design envisaged for each child to be followed for six months to monitor their clinical outcome after the end of treatment and to assess the risk of relapse.

This involved twice-monthly visits to the homes of hundreds of children, made possible thanks to the know-how of ALIMA, both from the logistic and operational point of view and for the work in gaining acceptance of this research project and new strategy by the community concerned. The combined expertise of the researchers and the humanitarians ensured that almost no children were lost to follow-up, meaning that the scientific evaluation of the OptiMA strategy had as little bias as possible.

A superior and less costly strategy

The researchers were able to show that the OptiMA strategy was not only no less effective than that of conventional programs, but that it was actually more effective. The treatment of acute malnutrition based on a single program and using a single therapeutic product with progressively reduced doses led to improved child nutritional status and fewer relapses over a six-month period. More particularly, it led to a more rapid improvement in the health of the most moderately affected children. These children were also less likely to relapse during the follow-up period or develop more severe stages of malnutrition.

In addition, using only one nutritional product at optimized doses reduced the cost per child. The scientists show that in comparison with the programs usually implemented, OptiMA makes it possible to treat 30% more children while using 20% less nutritional products.

“Our strategy allows us to treat malnutrition at an earlier stage, by decompartmentalizing the treatment of moderate and severe malnutrition. In the current context, after two years of the COVID-19 pandemic, we are facing a growing number of malnourished children and complex situations in African health centers. The proposal to simplify and optimize the treatment of child malnutrition is appropriate to the changing context in which we live,” emphasizes Renaud Becquet, Inserm researcher and joint leader of the Global Health in the Global South team at the Bordeaux Population Health Research Center (Inserm/Université de Bordeaux).

The same teams are now testing the strategy in another clinical trial, this time in Niger. They are comparing it with the national protocol and another simplified strategy to see if its benefits can be replicated in other settings and other populations.

What is acute malnutrition in children under 5 years of age?

Malnutrition is characterized by an imbalance between nutrient intake and the needs of the body. When this intake is insufficient, the body becomes weaker and loses weight.

Acute malnutrition mainly affects children under 5 years of age. It is characterized by sudden, severe weight loss due to insufficient calories and nutrients, following an infectious disease such as diarrhea, respiratory infections, malaria and/or lack of access to a varied diet in sufficient quantity.

The new OptiMA strategy suggests using only MUAC to screen for acute malnutrition because it is simple to measure. Requiring few resources, mothers can be quickly trained in its use and thereby detect malnutrition in their children at an early stage.

Simplifying and optimising the management of uncomplicated acute malnutrition in children aged 6 to 59 months: a non-inferiority randomised controlled trial in the Democratic Republic of Congo