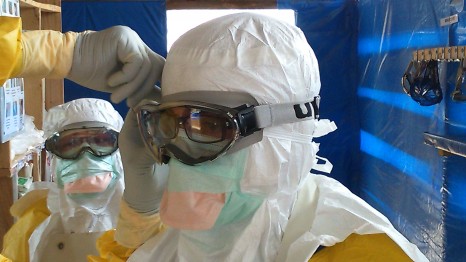 An international research team involving Inserm and the National Institutes of Health (NIH) has just published the results of the PREVAIL study on treatment for the Ebola virus. While not definitive, the results show that ZMapp may benefit patients with the Ebola virus disease.

These results are published in The New England Journal of Medicine.

In this trial conducted in the context of the Ebola epidemic in West Africa, the effectiveness of the experimental drug ZMapp[1] was compared with the best supportive[2] care given at treatment sites. Used in combination with current care, ZMapp was well-tolerated and is leading to a higher survival rate than supportive care alone. However, the decreasing epidemic trend in West Africa at the time of the trial prevented the enrolment of a sufficient number of participants to prove this point definitively.

ZMapp is a combination of three antibodies that target a protein on the surface of the Ebola virus. By binding to the virus in an infected individual, they block its ability to infect human cells. It is believed that this blockade provided by the drug and administered as early as possible reduces the growth of the infectious agent and allows the patient’s immune system to mount an effective response in sufficient time.

The study opened in March 2015. All patients (except the first patient) were enrolled in West Africa where the epidemic is ongoing: 5 in Liberia, 12 in Guinea, and 54 in Sierra Leone. Patients of all ages with Ebola infections were eligible. The average age of the participants was 24 years, and slightly more than half were women. Although the team planned to enrol up to 200 patients, the study closed in late January 2016 once it became clear that the epidemic was curtailed in this region.

This was a randomised, controlled trial. Each patient was assigned by lot into two study groups with different treatment strategies. One group only received the supportive care available at their treatment sites. In Guinea, this supportive care also included Favipiravir[3], an antiviral drug whose potential benefit against the Ebola disease was previously demonstrated by Inserm[4]. Meanwhile, the second group received supportive care plus three consecutive infusions of ZMapp over the course of one week including, where applicable, Favipiravir.

A total of 21 patients, nearly one-third, died during the study. To assess whether ZMapp was effective, the team compared the number of deaths in each group after 28 days.

Given the lack of scope due to enrolment difficulties and insufficient staffing, this difference did not reach the statistical significance required to offer a firm conclusion. However, based on these results, the administration of ZMapp is approved should new Ebola cases arise in these 3 countries. This authorisation is issued under an expanded access protocol[5] (EAP, expanded access protocol).

According to Denis Malvy, Inserm researcher and co-investigator in this trial in Guinea: “The results from this trial mark a prominent step in treating the Ebola virus disease. I am also pleased that these results were obtained thanks to the unique partnership between researchers, authorities in Guinea and ONGs. I have no doubt that these collaborations will continue to bear fruit in the months to come.”

Inserm’s involvement in this clinical trial was made possible through the REACTing network (REsearch and ACTion targeting emerging infectious diseases) designed to:
• improve research planning during periods between crises: governance, preparation of research tools, identification of research priorities, application for funding, and ethical and legal aspects;

This network is organised around a steering committee of some fifteen human health specialists, and relies on an 8-member scientific committee and methodological centres located in the North (F. Mentré, Bichat University Hospital) and in the South (A. Fontanet, Institut Pasteur). REACTing does not target any particular disease, and can get involved in all emerging infectious diseases. Its scope of action is broad, from fundamental research to human and social sciences, promoting a cross-disciplinary approach.

Guinea’s involvement (also called JIKIMapp) in the PREVAIL trial was led by the JIKI team at the treatment site in Forécariah, Coastal Guinea, directed by the French Red Cross. This study is part of the ongoing pioneering trial to assess the antiviral drug Favipiravir in Guinée-Forestière between December 2014 and April 2015.

Financial or logistic support for the trial was provided by NIAID/NIH; the French Institute national de la santé et de la recherché médicale (INSERM); the Republic of Sierra Leone Armed Forces; the Ministries of Health and U.S. Embassy staff in Liberia, Sierra Leone, and Guinea; the U.S. Centers for Disease Control and Prevention (CDC) and the CDC Foundation; the U.S. Biomedical Advanced Research and Development Authority; and the U.S. Defense Threat Agency. The trial was conducted in partnership with other academic, governmental and non-governmental agencies, including Bordeaux University Hospital, in the Franco-Guinean area.

[1] Made by Mapp BioPharmaceutical Inc. of San Diego, CA, USA

[3] Made by laboratories in Toyama/Fujifilm, Japan

[5] An EAP is a U.S. regulatory mechanism that enables an unlicensed drug to be made available to treat a serious or life-threatening disease for which no approved therapy is available. The U.S. Food and Drug Administration has approved the EAP for use in the United States.

Scientists had previously shown in mice that the presence of emulsifiers in many processed foods could promote intestinal inflammation. In a new study, the same team has shown in healthy human volunteers that carboxymethylcellulose (CMC), a widely used food emulsifier, affects the ...