How fiber prevents diabetes and obesity

Scientists have known for the past twenty years that a fiber-rich diet protects the organism against obesity and diabetes but the mechanisms involved have so far eluded them. A French-Swedish team including researchers from CNRS, Inserm and the Université Claude Bernard Lyon 1 (Unité Inserm 855 “Nutrition et Cerveau”) has succeeded in elucidating this mechanism, which involves the intestinal flora and the ability of the intestine to produce glucose between meals. These results, published in the journal Cell on 9 January 2014, also clarify the role of the intestine and its associated microorganisms in maintaining glycaemia. They will give rise to new dietary recommendations to prevent diabetes and obesity. 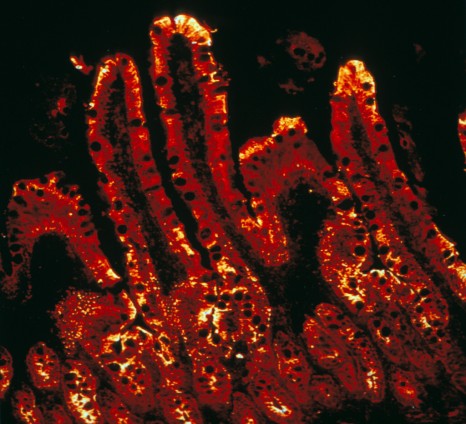 Most sweet fruit and many vegetables such as salsify, cabbage or beans are rich in so-called fermentable fibers. Such fibers cannot be digested directly by the intestine but are instead fermented by intestinal bacteria into short-chain fatty acids such as propionate and butyrate, which can in fact be assimilated by our bodies. The protective effect of these fibers is well known to researchers: animals fed a fiber-rich diet become less fat and are less likely to develop diabetes than animals fed a fiber-free diet. Nevertheless, the mechanism behind this effect has until now remained a mystery.

The team headed by Gilles Mithieux, CNRS researcher in the “Nutrition et Cerveau” unit (Inserm / Université Claude Bernard Lyon 1), wondered whether this mechanism could be linked to the capacity of the intestine to produce glucose. The intestine is in fact capable of synthesizing this sugar and releasing it into the blood stream between meals and at night. However, glucose has particular properties: it is detected by the nerves in the walls of the portal vein (which collects the blood coming from the intestine), which in turn sends a nerve signal to the brain. In response, the brain triggers a range of protective effects against diabetes and obesity: the sensation of hunger fades, energy expenditure at rest is enhanced and, last but not least, the liver produces less glucose.

In order to make the connection between fermentable fibers and the production of glucose by the intestine, the researchers subjected rats and mice to diets enriched with fermentable fibers, or with propionate or butyrate. They then observed a strong induction of the expression of genes and enzymes responsible for the synthesis of glucose in the intestine. They showed that the intestine of these animals used propionate as precursor to increase the production of glucose. Mice fed a fat- and sugar-rich diet, but supplemented with fibers, became less fat than control mice and were also protected against the development of diabetes thanks to significantly increased sensitivity to insulin.

The researchers repeated the experiment with mice whose intestine’s ability to produce glucose had been suppressed by genetic engineering. No protective effect was then observed: these mice became fat and developed diabetes like those fed a fiber-free diet. It is therefore the production of glucose by the intestine from propionate and butyrate that is behind the positive effects of fermentable fibers on the organism.

Apart from this previously unknown mechanism, this work sheds light on the role of the intestinal flora which, by fermenting dietary fiber, provides the intestine with precursors to produce glucose. It also demonstrates the importance of the intestine in the regulation of glucose in the body. Finally, these findings should make it possible to propose nutritional guidelines and to highlight new therapeutic targets for preventing or treating diabetes and obesity.