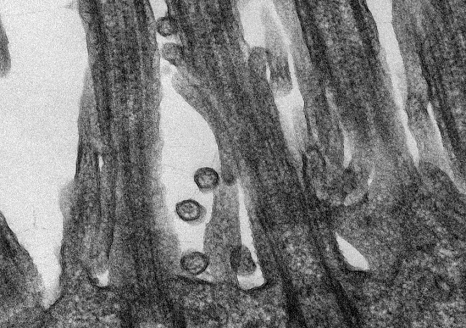 Almost 60% of patients hospitalized for COVID-19 have lymphopenia – a lower than normal number of lymphocytes[1] in the blood circulation. The mechanisms underlying this condition have long been poorly understood. In a new study, researchers from Inserm and Université de Paris[2] in collaboration with Canadian and Portuguese teams (Université Laval and Life and Health Sciences Research Institute [ICVS], respectively)[3] have revealed a phenomenon of programmed cell death known as “apoptosis”[4] that would explain the loss of lymphocytes in these patients. They have also shown in vitro that this process can be reversed by using caspase inhibitors – molecules that block the action of the enzymes responsible for apoptosis. These findings, published in the January 22, 2022 issue of Cell Death & Differentiation, make it possible to envisage new therapeutic avenues for patients with severe forms of COVID-19.

COVID-19 is a disease that varies broadly from one patient to another. While most infected people are asymptomatic or have mild symptoms, others develop severe forms of the disease.

Research on hospitalized patients had until now focused mainly on the inflammatory state that characterizes serious forms, and less so on other biomarkers. Yet among these patients, 60% have lymphopenia. The number of lymphocytes in their blood is lower than normal, especially the number of CD4 T cells.

Detection of apoptotic lymphocytes with nuclear condensation and fragmentation visualizable by electron microscopy and not immunofluorescence. © Jérôme Estaquier

The team of Inserm researcher Jérôme Estaquier, at Unit 1124 (Inserm/Université de Paris) and Université Laval in Quebec, has studied this phenomenon. Thanks to their long history of researching AIDS – a disease for which a low blood CD4 level is a marker of poor prognosis – the scientists were able to apply their knowledge of these processes to COVID-19.

As part of their research, the scientists studied blood samples taken from patients hospitalized from April to June 2020 for COVID-19 (some of them in intensive care) and compared them with those of healthy donors. They showed that lymphopenia was correlated with the presence of several severity biomarkers, including the death ligand, FasL.

They also showed that a process of programmed cell death – apoptosis – is responsible for the disappearance of CD4 T cells in hospitalized patients with COVID-19.

In an attempt to block this process, the researchers then drew on their previous HIV research in animal models, in which they had shown that administering molecules called caspase inhibitors can stop apoptosis, restore CD4 T cells, and prevent the onset of AIDS. Here they show that, with these molecules, the process of lymphocyte apoptosis is also reversible in the case of COVID-19.

These findings[5] open up new therapeutic avenues for the early treatment of hospitalized patients with lymphopenia. “The idea is now to set up phase 1 clinical trials to test the safety of caspase inhibitors in humans. CD4 cells are the cornerstone of the immune system. As such, these molecules could ultimately be useful for patients presenting with lymphopenia on admission to hospital, ” emphasizes Estaquier.

[1] Lymphocytes are white blood cells that play a key role in the immune system. They defend the body in the face of attacks.

[3] The study was also conducted in collaboration with and the French National Center for Scientific Research (CNRS) (Institute of Human Genetics, IGH).

[4] Apoptosis is the programmed death of cells. This is a process by which cells trigger their self-destruction in response to a stress signal or death ligand.

[5] This study was funded by FRM and AbbVie.

Drawing on epidemiological field studies and the FrenchCOVID hospital cohort coordinated by Inserm, teams from the Institut Pasteur, the CNRS and the Vaccine Research Institute (VRI, Inserm/University Paris-Est Créteil) studied the antibodies induced in individuals with asymptomatic or symptomatic SARS-CoV-2 infection. The ...