Testicular macrophages are guardians of fertility 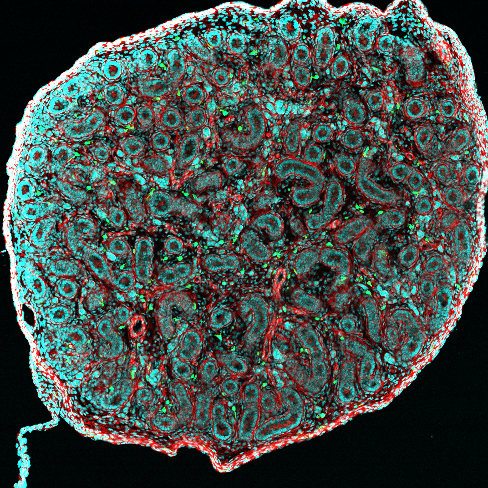 The origin, development, and characteristics of two types of testicular macrophage have been described by a CNRS team at the Centre d’Immunologie de Marseille-Luminy (CNRS / INSERM / Aix-Marseille University). To elucidate the nature of these immune cells, the researchers used a novel cell tracing method. Their findings were published on August 7, 2017, in the Journal of Experimental Medicine, and are of fundamental importance. They may help understand certain kinds of infertility in men and find new treatments for them.

From the start of life, an individual’s immune system learns to distinguish self—that is, native cells—from other, potentially pathogenic cells. But in males, as sperm only appear at puberty, they may be mistaken for foreign cells by certain elements of the immune system.  Testicular macrophages are special immune cells that rush to the defense of sperm. By releasing specific molecules, these guardians of fertility prevent other immune system agents from entering the testes.

Macrophages not only migrate to sites of infection and phagocytose pathogens, but also modulate immune system activity to ensure proper organ function and regeneration. They may arise from either embryonic progenitors or bone marrow cells in adults. Research with mice has enabled the team of Michael Sieweke from the Centre d’Immunologie de Marseille-Luminy (CNRS / INSERM / Aix-Marseille University) to describe both testicular macrophage populations in depth.

The testis is divided into two compartments. One kind of testicular macrophage is found in the interstitial spaces, where testosterone-producing Leydig cells are also located. These interstitial macrophages are of embryonic origin: they are present from the beginning of the individual’s life. The other kind is peritubular—that is, located on the surface of the seminiferous tubules that house sperm cell precursors. Each macrophage population has distinctive cellular markers.

The researchers used a new cell tracing method to follow the movement of peritubular macrophages from the bone marrow to the testes. They discovered that these macrophages only appear two weeks after the mice are born, which corresponds to the pubescent stage in human males. Surprisingly, once they have been established in the testes, macrophages of both populations remain there for the rest of their long lives. Sieweke’s team will next focus their research efforts on the relationships between macrophages, sperm, and testosterone production, which may yield innovative treatments for certain kinds of male infertility.