In the eye of the medulloblastoma

Can genes normally expressed only in the eye be activated in brain tumours? Such a phenomenon, though surprising, has been observed in certain types of medulloblastoma, paediatric tumours of the cerebellum. Researchers from the CNRS, Institut Curie, Inserm and Université Paris-Sud[1], together with researchers at St. Jude Children’s Research Hospital (Memphis, United States), have pinpointed the role of these genes in the tumour process, thus offering new therapeutic targets. Their findings appear in the 12 March 2018 edition of Cancel Cell.

Medulloblastoma is treated with a combination of surgery, radiotherapy and chemotherapy, which results in a survival rate of 80 %, albeit with significant side effects. Group 3 medulloblastoma, associated with frequent rates of recurrence and a much lower survival rate, is characterised by the expression of a gene cluster named “photoreceptor program”. Normally, these genes are only expressed in the retina, where they define photoreceptor identity and, in particular, ensure that light signals are converted into nerve impulses.

Given that they are not expressed during the normal development of the cerebellum, activation of these genes in medulloblastoma is very surprising. Aberrant differentiation programs – unrelated to the tissue in which the tumour originates – have already been found in other types of cancer but never thought to be directly involved in the tumour process.

The presence of a protein known as NRL within this “photoreceptor program” initially drew the attention of Celio Pouponnot’s team, which for many years has studied a family of proteins similar to NRL that is involved in the formation of cancers. Researchers also identified the role of another protein specific to the retina: CRX. Strikingly, this study shows that both these factors are involved in the medulloblastoma by activating key genes: CCND2, which promotes cell proliferation, and BCL2L1, which inhibits cell death (apoptosis).

The research team then used pharmacological agents to target these anti-apoptotic proteins in preclinical models by grafting human medulloblastoma cells into mice. This treatment shrunk the tumour and extended the lives of the mice, proving the potential of this therapeutic target. These results, however, cannot be directly transposed to children for whom such pharmacological agents could be toxic. 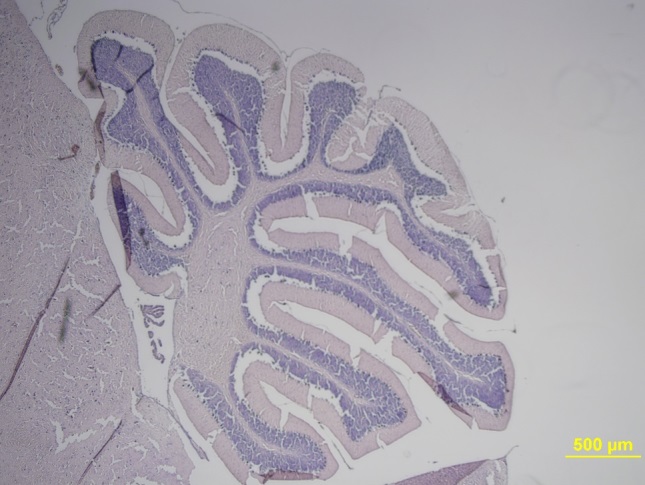 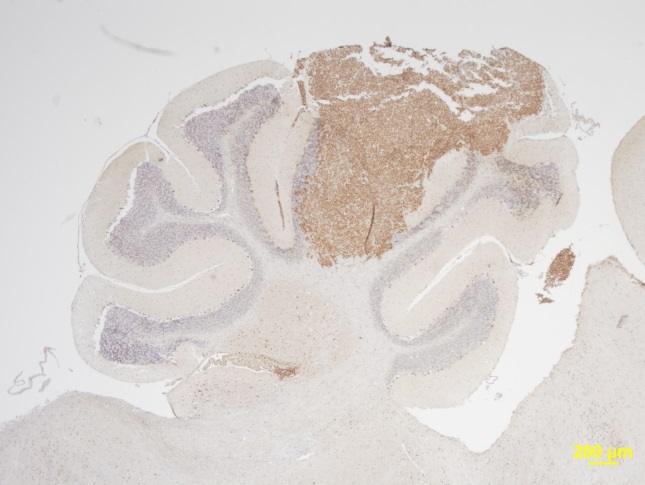 Section of normal cerebellum (left), and cerebellum with medulloblastoma (right). The medulloblastoma expresses genes normally active in the retina only, including NRL and CRX, which play a role in the formation of the tumour. © Morgane Morabito / UMR3347 CNRS-Institut Curie-INSERM-Université Paris-Sud

TO CITE THIS POST :
Press release – Inserm press room In the eye of the medulloblastoma Link : https://presse.inserm.fr/en/dans-loeil-du-medulloblastome/30903/