By the sixth month of pregnancy, the human brain is capable of processing speech

The immature brain of a premature infant is capable, at the age of three months pre-term, of distinguishing syllables uttered by male and female voices. These results obtained by INSERM researchers at the University of Picardy Jules Verne and the CEA’s NeuroSpin Imaging Centre, were published in the PNAS journal dated 25 February 2013. They highlight the very early sophisticated organisation of the regions of the brain involved in language-processing and social communication in humans.

At birth, infants are capable of distinguishing between similar syllables, of recognising their mother’s voice and of differentiating between several human languages. Are these abilities in the human infant due to the presence of innate mechanisms specific to the human race for processing speech or do they indicate swift learning of the characteristics of the mother’s voice during the final weeks of pregnancy?

To discover the truth, Fabrice Wallois, Director of the mixed UPJV/INSERM research unit known as the “Research Group for Analysis of the Multimodal Cerebral Function” (GRAMFC), and Ghislaine Dehaene-Lambertz, (INSERM, NeuroSpin/Atomic Energy and Alternative Energies Commission (CEA), University of Paris-Sud) in collaboration with hospital doctors at the Amiens Picardy University Hospital, tested the auditory discrimination abilities of twelve premature babies, born at 28 to 32 weeks of amenhorræa, i.e. born two to three months’ pre-term.

At this stage of development, the brain is immature since the neurones are still in the process of migrating to their final destination. Yet the first connections between the brain and the outside world are being set up, especially those that enable the fœtus to hear sounds, thus enabling it to record the first brain responses to external stimulation.

The authors of this study stimulated premature infants by using audio stimulation, exposing them to the sounds of two similar syllables (“ga” and “ba”) pronounced by either a man or a woman. They recorded the brain responses by using functional optical imaging (near infrared spectroscopy (NIS)). The researchers were thus able to show that despite the fact that their brains were still immature, the premature babies were receptive to changes in the voice (male or female) and changes in phonemes ( “ba” or “ga”) (figure 1).

Furthermore the sets or networks of neurones involved in premature babies are very similar to those described in the adult when performing the same type of task. They are asymmetrical and especially involve the frontal areas. As in adults, the right frontal area responds to newness, regardless of the change involved, whereas the left frontal area or Broca’s region, only responds to a change of phoneme. 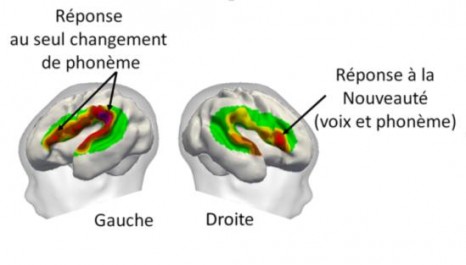 These results show very early, as soon as the first cerebral connections are established (three months before term) and above all before any learning process has occurred, that the human brain is capable of processing special characteristics of human speech thanks to the sophisticated organisation of certain language areas of the brain (the right and left perisylvian regions). Since the organisation of the regions of the brain being governed by genetic expression during the development of the fœtus, the authors suggest that the emergence of language is largely influenced by genetics and thus by innate mechanisms.

This study received support from the Picard Regional Council and the ERDF (European Regional Development Fund).

TO CITE THIS POST :
Press release – Inserm press room By the sixth month of pregnancy, the human brain is capable of processing speech Link : https://presse.inserm.fr/en/by-the-sixth-month-of-pregnancy-the-human-brain-is-capable-of-processing-speech/6868/