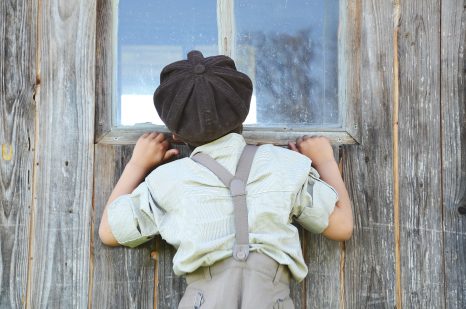 Why do some of our choices appear to be driven by a desire to explore the unknown? An Inserm team from École Normale Supérieure led by 2017 ERC grant-winner Valentin Wyart has shown that most of these choices are not motivated by curiosity but by errors caused by the brain mechanisms implicated in evaluating our options. These findings have been published in Nature Neuroscience.

Where shall we eat tonight – at our usual restaurant or one we have not tried before? Where shall we spend our next vacation – in the old family cabin or a rental halfway around the world? When we have various options to choose from, our decisions do not always lead us towards the safest one based on our previous experiences. This variability which is characteristic of human decisions is most often described in terms of curiosity: our choices are thought to be the reflection of a compromise between exploiting options that are known and exploring others whose outcomes are more uncertain. Curiosity is even considered to be an attribute of human intelligence – a source of creativity and unexpected discoveries. This interpretation is based on a very strong (albeit rarely explicitly stated) hypothesis, according to which we weigh up our options without ever making any errors.

An Inserm research team from the Laboratory for Cognitive and Computational Neuroscience (LNC2) funded by the European Research Council (ERC) wanted to test this implicit hypothesis upon which many findings are based. The researchers suspected that our capacity to weigh up and review our options is largely overestimated, based on findings published in 2016 in Neuron:

“One of our researchers had previously shown that our capacity to make the right choice based on partial indicators is restricted by errors of reasoning when these indicators are combined, and not by hesitancy at the time of making the choice. So we asked ourselves whether these errors of reasoning could be responsible for some of the choices considered as being a matter of curiosity by current theories. “

To back up their suspicions, the researchers studied the behavior of around one hundred subjects using a slot machine-style game that consisted of choosing between two symbols associated with uncertain rewards. They analyzed the behavior of the participants using a new theoretical model developed by Charles Findling, postdoc in the team and co-lead author of the article, which takes into account evaluation errors of the symbols.

As such, the authors discovered that over half of the choices usually considered as being a matter of curiosity were in reality due to errors of evaluation. “This finding is important, because it implies that many choices in favor of the unknown are made unbeknownst to us, without our being aware of it” explains team leader, Valentin Wyart.

“Our participants have the impression of choosing the best symbol and not the most uncertain, but they do it on the basis of wrong information resulting from errors of reasoning. “ 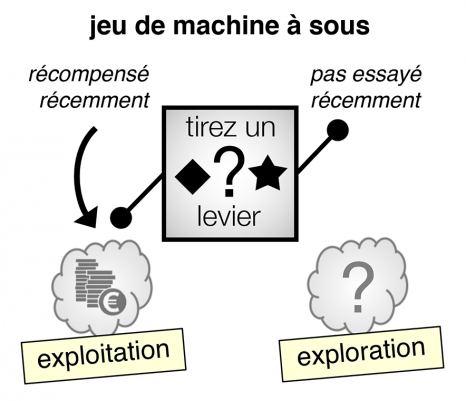 The participants played a slot machine-style game which involved choosing between two symbols associated with uncertain rewards. In this example, the participant has to choose between the left-hand symbol which won them money in the previous tests, and the right-hand symbol which has not been tried recently and whose outcome is therefore more uncertain. The current theories describe this type of choice as being the reflection of a compromise between exploiting known options (in this example, selecting the left-hand symbol) and exploring other more uncertain options (selecting the right-hand symbol).

In order to understand where these errors come from, the researchers recorded the brain activity of some of the participants using functional magnetic resonance imaging. They discovered that the activity of the anterior cingulate cortex, a region involved in decision-making, fluctuates with the evaluation errors made by the participants. The greater the activity of this region when evaluating the options, the greater the evaluation errors. For Vasilisa Skvortsova, postdoc and co-lead author of the article, “these errors of evaluation could be regulated via the anterior cingulate cortex by the noradrenaline neuromodulator system, controlling the precision of the mental operations performed by the brain”. In other words, our brain is thought to use its own errors to produce choices in favor of the unknown, without relying on our curiosity. “This is a radically different vision from the current theories that consider these errors as negligible”, insists Wyart. 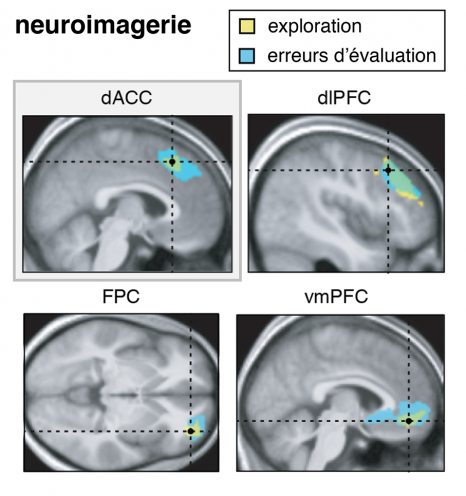 The researchers recorded the participants’ brain activity using functional magnetic resonance imaging. They discovered that the brain regions that activate when the participants explore uncertain symbols (shown in yellow) are the same ones that activate when the participants commit errors of reasoning. The brain regions shown are the dorsal anterior cingulate cortex (dACC), the dorsolateral prefrontal cortex (dlPFC), the frontopolar cortex (FPC) and the ventromedial prefrontal cortex (vmPFC).

Although these findings may appear surprising, are they really? Many major discoveries are the result of errors of reasoning: the discovery of America by Christopher Columbus, who believed he had reached the “East Indies” – a navigation error of 10,000 km, but also the discovery of radioactivity by Henri Becquerel, who initially thought that the radiation emitted by uranium was due to the re-emission of solar energy, or the discovery of the pacemaker by John Hopps when attempting to treat hypothermia with the help of radiofrequency. Going further, “the evolution of the species is also based on random variations of the genome, in other words genetic errors, some of which are retained by natural selection”, reiterates Wyart. So there is in fact nothing surprising about our brain taking advantage of its errors in order to think outside the box.

TO CITE THIS POST :
Press release – Inserm press room The creativity of the human mind rooted in errors ? Link : https://presse.inserm.fr/en/are-errors-responsible-for-the-creativity-of-the-human-mind/37108/