Diabetes: fasting in the wrong place at the wrong time

During fasting, in order to cope with nutrient depletion, cells break down their own constituents, a process known as autophagy.

Roméo Ricci’s team at the Institute of Genetics and Molecular and Cellular Biology (CNRS/Inserm/University of Strasbourg) has shown that, during fasting, the pancreatic beta cells, which are responsible for insulin secretion, do not compensate for nutrient deficiencies by the “classic” autophagy mechanism, which is completely suppressed, but by breaking down insulin secretory granules. 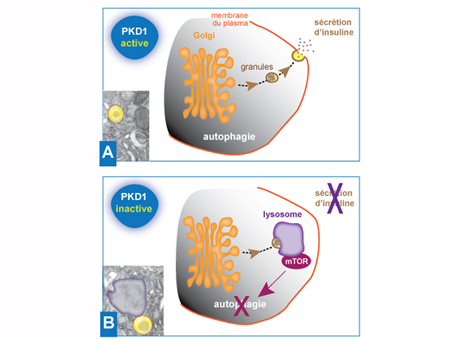 © IGBMC. When protein kinase D1 (PKD1) acts (A), insulin, produced by the Golgi bodies in the beta cells, is released by the granules (in yellow, in the diagram and electron micrograph, inset). During fasting (B) and PKD1 inactivation, the insulin granules in the beta cells fuse with the lysosomes (in purple) containing the enzymes needed to degrade insulin; at the same time, mTOR activation suppresses autophagy.

In type 2 diabetes, insulin secretion by the pancreatic beta cells should be increased to cope with excessively high glucose levels. However, in this disease, the body reacts as though it were fasting. The mechanism discovered by Roméo Ricci’s team, by working against the mechanism of insulin secretion and autophagy, could be involved in the impaired functioning of pancreatic beta cells in type 2 diabetes. These results are published in the 20 February 2015 issue of Science.

TO CITE THIS POST :
Inserm press room Diabetes: fasting in the wrong place at the wrong time Link : https://presse.inserm.fr/en/diabetes-fasting-in-the-wrong-place-at-the-wrong-time/18042/