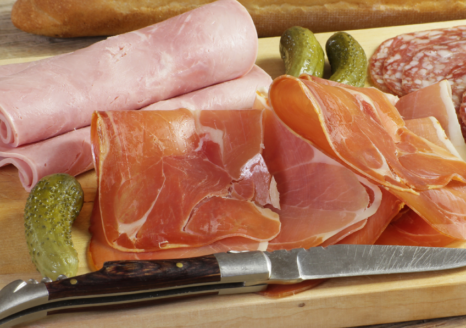 In addition to their role in food preservation, nitrites and nitrates give a pink color to ham and other processed meat products. © Adobe Stock

More than 15,000 packaged products on the French market currently contain nitrites or nitrates. Although commonly used to ensure better preservation of processed meats (ham, sausages, etc.), the safety of these food additives is the subject of debate. Nitrites and nitrates are also naturally found in various foods (particularly vegetables) and in drinking water, but agricultural and industrial practices can increase their levels.

Researchers from Inserm, INRAE, Université Sorbonne Paris Nord, Université Paris Cité and Cnam, as part of the Nutritional epidemiology research team (EREN-CRESS), studied the role of dietary nitrites and nitrates in the development of type 2 diabetes. The scientists analyzed data on the health and exposure to nitrites/nitrates of 104,168 French adults participating in the NutriNet-Santé cohort study. While their statistical analyses suggest an association between the consumption of nitrites and increased type 2 diabetes risk, no such link has been found with nitrates. Their findings have been published in PLOS Medicine.

Nitrites and nitrates are naturally present in certain foods (particularly vegetables) as well as in water and soil – a phenomenon that can be increased by agricultural and industrial practices. These compounds are therefore found in our diet.

Commonly used as additives to increase the shelf lives of certain foods such as processed meat, their antimicrobial role makes it possible to limit the development of pathogenic bacteria that cause certain food-borne infections. They also give a pink color to ham and other processed meat products. Over 15,000 packaged products on the French market currently contain added nitrites or nitrates.

This is despite recommendations by several public health authorities to limit the use of nitrites and nitrates as food additives due to their probable impact on colorectal cancer risk[1]. Although previous experimental studies had already suggested an association between exposure to nitrites and nitrates and the onset of metabolic dysfunction, epidemiological and clinical data remain sparse.

In order to learn more about the subject, a research team from Inserm, INRAE, Université Sorbonne Paris Nord, Université Paris Cité and Cnam consulted the data collected from 104,168 participants in the NutriNet-Santé prospective cohort (see box below).

The cohort volunteers had given details of their food consumption by sending the scientists full records of their meals over several 24-hour periods, including the names and brands of the products. This enabled the team to assess their exposures to nitrate and nitrite additives, with high levels of precision. In addition, this information was supplemented by control data provided by the health authorities, which shed light on the volunteers’ levels of exposure to nitrites and nitrates of non-additive origin – i.e. via water and soil – according to their location within France.

The scientists also had access to data on the medical history of the participants, their physical activity, lifestyle and health status, and their sociodemographic information. The participants studied here did not have type 2 diabetes when they joined the study, and they were followed between 2009 and 2021 to monitor for its development.

The researchers conducted statistical analyses in order to study the associations between exposures to nitrites and nitrates – in both food additive and non-additive form – and the risk of type 2 diabetes.

Those participants with a greater exposure to nitrites – specifically from food additives but also non-additive sources – presented a higher risk of developing type 2 diabetes.

No association between exposure to nitrates and type 2 diabetes risk was found.

The results also did not support any potential benefits for dietary nitrites or nitrates in type 2 diabetes prevention.

“This is the first large-scale cohort study that suggests an association between additive nitrites and a potentially increased risk of type 2 diabetes,” explain Bernard Srour, post-doctoral researcher at Inserm, and Mathilde Touvier, Inserm research director, who led this study.

“These results provide new evidence in the context of current discussions on the need for a reduction in the use of nitrite additives in processed meats by the food industry, and could also support the need for better regulation of soil contamination by fertilizers. In the meantime, several public health authorities worldwide already recommend citizens to limit their consumption of food containing controversial additives, among which sodium nitrite,” conclude the two scientists.

NutriNet-Santé is a public health study coordinated by the Nutritional epidemiology research team from the Center of research in epidemiology and statistics (EREN-CRESS, Inserm/INRAE/Cnam/Université Sorbonne Paris Nord/Université Paris Cité) which, thanks to the commitment and loyalty of over 170,000 participants (known as Nutrinautes), advances research into the links between nutrition (diet, physical activity, nutritional status) and health. Launched in 2009, the study has already given rise to over 250 international scientific publications. In France, a drive to recruit new participants is still ongoing in order to continue to further research into the relationship between nutrition and health.

By devoting a few minutes per month to answering questionnaires on diet, physical activity and health through the secure online platform etude-nutrinet-sante.fr, participants in France contribute to furthering knowledge of the links between diet and health.

[1] Anses report on the risks associated with the consumption of nitrites and nitrates filed in July 2022.

Alcohol consumption is both directly and indirectly implicated in the onset of some 60 diseases, making it a major health risk factor. In France, around 43 million people consume alcohol. Faced with its inherent health, social and financial impacts, the country’s Health ...

Dietary exposure to nitrites and nitrates in association with type 2 diabetes risk: Results from the NutriNet-Santé population-based cohort study