A team coordinated by Antoine Triller, Inserm Research Director, Director of the Institute of Biology at the École Normale Supérieure, and Ronald Melki, CNRS Research Director (Paris-Saclay Institute of Neuroscience), has just identified the target of an alpha-synuclein protein, which is pathogenic in Parkinson’s disease. This target is an ATP-dependent sodium/potassium pump. It may potentially be used in the development of symptomatic treatments for Parkinson’s disease. Details of this work are published in the 31 August 2015 issue of The EMBO Journal. 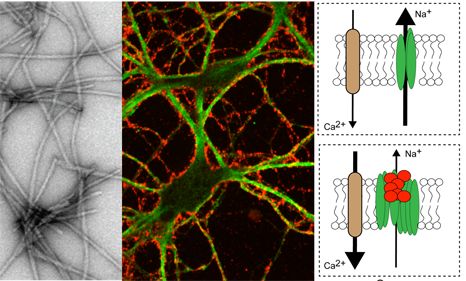 Alpha-synuclein forms fibrils (grey) that adhere (red) to the membrane of neurons (green). On the right side of the figure: the fibrils (red), on aggregating, disrupt the function of the pump (green) that maintains the sodium (Na+) gradient. This depolarises the neuron and increases the entry of calcium (Ca2+), which is toxic to the neuron. © Inserm/Antoine Triller

Alpha-synuclein is one of the pathogenic proteins (along with the tau and beta-amyloid proteins for Alzheimer’s disease, or prion protein for Kreutzfeldt-Jacob disease) that spread from cell to cell, and are associated with the physiopathological changes observed in neurodegenerative diseases.

Antoine Triller and his colleagues have shown that this protein aggregates on the neuronal membrane, and interacts with a protein on the surface of the neuron, the a3 subunit of the (Na+)/potassium (K+) ATPase pump. This pump controls the flow of sodium and potassium ions to and from the neurons, and hence the electrical activity of these neurons.

In humans, mutations in this pump are responsible for motor symptoms of early onset Parkinson’s disease, and alternating hemiplegia of childhood (AHC). The researchers have just demonstrated that alpha-synuclein, which diffuses between the cells, interacts with the Na+/K+ ATPase pump in the membrane. The pump, when bound to alpha-synuclein, is less well able to perform its pumping activity. Neuronal excitability is disrupted. Over time, the signals are no longer transmitted normally between neurons, and the symptoms of Parkinson’s disease or AHC appear.

This discovery was made possible through a combination of molecular biology and super-resolution microscopy techniques making it possible to follow individual molecules. In 2014, this latter approach was rewarded by the conferring of the Nobel Prize in Chemistry on Eric Betzig, Stephan W. Hell and William E. Moerner.

“This is a new mechanism that makes it possible to explain at cellular level the neuronal malfunctions in Parkinson’s disease,” explains Antoine Triller, Inserm Research Director. “This work sheds light on the fundamental and initial processes of the disease, and enables exploration of new therapeutic strategies to control its progression and symptoms,” he adds.

TO CITE THIS POST :
Inserm press room Discovery of a new mechanism of action of a protein that is toxic in Parkinson’s disease Link : https://presse.inserm.fr/en/discovery-of-a-new-mechanism-of-action-of-a-protein-that-is-toxic-in-parkinsons-disease/20310/