Achondroplasia is the most common form of dwarfism, affecting roughly one child in every 15,000 births[1]. Inserm researcher Elvire Gouze, and her associates from the Mediterranean Centre for Molecular Medicine in Nice (Inserm Unit 106), have succeeded in restoring bone growth in mice suffering from this developmental pathology. The proof-of-concept created by the researchers is for a therapy based on injecting a particularly promising human growth factor, which restores the growth process in long bones. Its results include a reduced mortality rate in the treated mice, with no complications associated with the disease. No apparent toxicity was observed over the short term.

The results of this research were published in the  Science Translational Medicine review on 18 September. 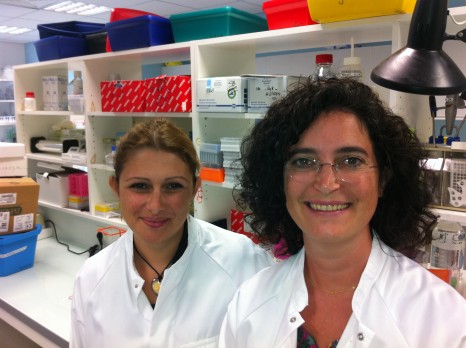 Achondroplasia is a rare genetic disease characterized by abnormal bone development. The related growth failure affects bones in the upper and lower limbs, and some bones in the skull; people suffering from it are short, reaching no more than an average of 135 cm in adulthood. In the most severe cases, deformation of the skull and vertebrae may result in neurological and/or orthopaedic complications. This pathology is caused by mutations in the FGFR3 (Fibroblast growth factor 3) gene.  The protein produced by this gene is a receptor known for its role in bone growth regulation. Normally, growth can only occur through a subtle mechanism during which the FGF growth factor bonds with the FGFR3 receptor and then separates from it. In the case of achondroplasia, the receptor/growth factor pair is disturbed and prevents the bone from growing in a constant manner.

In this study, researchers from Inserm and the Université de Nice Sophia Antipolis have found a way to prevent constant protein activation. They implemented a new strategy, which consists of using a decoy – functional soluble human FGFR3 receptors – that is injected in mice afflicted with the disease, thus restoring the equilibrium required between bone growth activation and inhibition.

The solution containing soluble FGFR3 receptors was injected into growing mice suffering from dwarfism twice a week over a three-week period.  The additional normal receptors made it possible for the growth factor to bond and separate normally, thus restoring bone growth. Mutated mice then grew normally and reached the average adult size. Once the therapy had stopped, the researchers then monitored the mice over an eight month period to check there were no signs of therapy toxicity. During this monitoring, the researchers observed that an increased pelvis size enables reproduction with litters identical to disease-free mice.

“Rather surprisingly, our strategy prevents the most severe complications observed in mice (reduced mortality rate, respiratory problems, etc.). This could lead us to believe that injection-based therapy could replace surgery for children suffering from this disease” explains Elvire Gouze, Inserm researcher.

Preventing the development of achondroplasia

Today, there are no proven therapies to prevent the development of the disease, even if some (such as growth hormone injections or surgical limb-lengthening) have undergone trials without any convincing results.

“The product that we tested has major advantages compared with those tested in other ongoing trials: its lifetime in the body is sufficiently long, meaning daily injections are not necessary. We think that our approach could be effective when treating children with achondroplasia and possibly other forms of dwarfism” underlines the researcher, who is the main author of the study.

The researchers will now endeavour to verify that there are no long-term toxic effects. Before undertaking clinical studies in human patients, they must also identify the minimum dose at which the therapy is effective and when it becomes toxic. Another area to be explored is to determine whether it is possible to begin the therapy later, thereby increasing the number of patients who could benefit from this treatment.