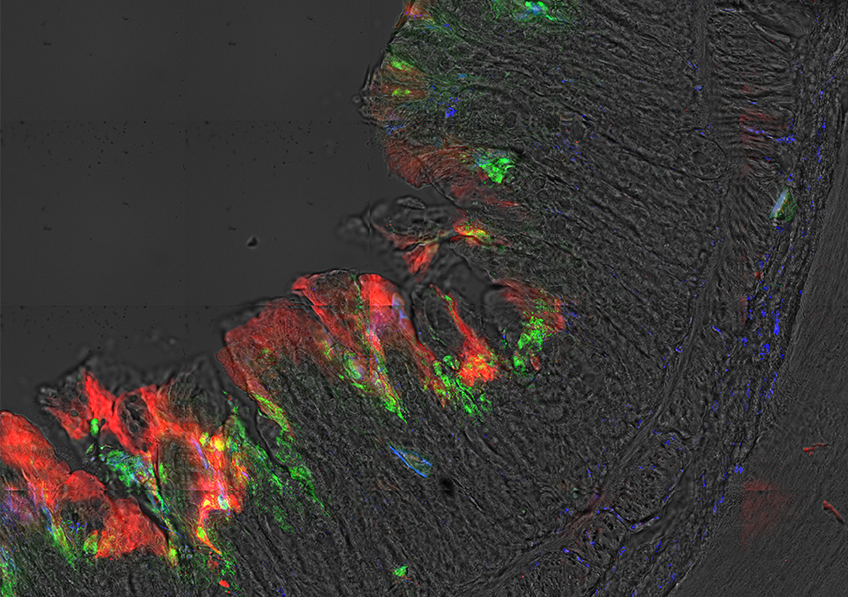 Bacillary dysentery caused by the intestinal bacteria Shigella is a major health problem in tropical regions and developing countries. Complications from this infection lead to several hundred thousand deaths a year, primarily among infants. Researchers from Inserm and the Institut Pasteur have studied the mechanisms of Shigella virulence. They found that these bacteria are not only able to consume the oxygen in colonic tissue in order to grow and create foci of infection, but can also adapt their mode of respiration so that they can continue to grow once the oxygen in these foci has been used up. These findings, published in Nature Microbiology, open up new prospects for the development of antibiotics and vaccines to combat this group of bacteria, which is on the WHO list of 12 priority pathogens.

Shigella is a group of pathogenic enterobacteria (bacteria found in the digestive tract) that cause bacillary dysentery, which is also known as shigellosis. They are transmitted via the fecal-oral route, for example through food or water contaminated with fecal matter, and are thus primarily endemic in tropical regions, particularly in developing countries where a lack of hygiene and healthcare infrastructure favor outbreaks of disease. After ingestion, Shigella bacteria invade the cells of the intestinal wall and then the colonic mucosa, causing major inflammation combined with severe tissue damage. This causes symptoms such as abdominal pain, vomiting, diarrhea containing blood or mucus, and fever.

With no commercialized vaccine (the infection is currently treated with antibiotics), shigellosis remains a major public health problem, and results in 700,000 deaths per year around the world—primarily among children under the age of 5—from acute complications.

The emergence of new multi-drug resistant strains of Shigella has prompted inclusion of the bacteria on the WHO list of 12 “priority pathogens” for which new treatments (vaccines or antibiotics) are urgently needed.

With this in mind, a team led by Inserm researcher Benoit Marteyn within Unit 1202, “Molecular Microbial Pathogenesis” (Institut Pasteur/Inserm), sought to better understand the mechanism used by Shigella to infect tissue by modulating the levels of oxygen present. To do this, the researchers used innovative image analysis methods developed by the Imagopole at the Institut Pasteur, which allowed them to study each cell individually (single-cell analysis) and monitor variation in the levels of oxygen O2 in intestinal tissues around isolated bacteria and in foci of infection, where bacteria are numerous.

The research group also found that foci of Shigella infection had abnormally low levels of oxygen (hypoxia). The denser the population of bacteria, the greater the consumption of O2. Hypoxia was not, however, seen around isolated bacteria away from the foci of infection.

Shigella bacteria are “facultative anaerobes,” which means that while they favor aerobic respiration (which uses O2 as fuel), if oxygen is lacking they can also switch to “anaerobic” respiration, which does not require O2. This characteristic enables them to continue to grow in hypoxic, or even anoxic (O2-depleted) foci after they have consumed all the oxygen in the tissues.

The researchers have thus shown that aerobic respiration of Shigella and their capacity to modulate the oxygenation of infected tissues enables the formation of hypoxic foci of infection within the intestinal mucosa, which constitutes the first stage in their colonization strategy, with over 99% of the bacterial population growing in these areas. When these foci are depleted of oxygen, the adaptability of the bacteria to O2-poor environments gives them a crucial advantage that explains their virulence and that of other facultative anaerobic enterobacteria.

“These findings are very important in relation to the search for new antibiotics and candidate vaccines to combat Shigella infection. Their mechanisms of action will need to be confirmed in hypoxic or even anoxic conditions, to reflect the pathophysiological conditions in which Shigella primarily grow within the colonic mucosa,” concludes Benoit Marteyn.