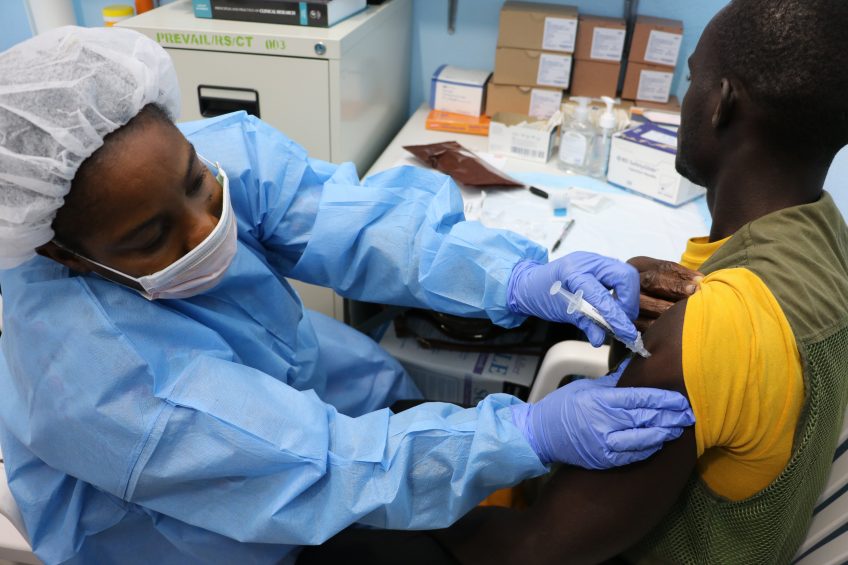 The French National Institute of Health and Medical Research (Inserm), the US National Institutes of Health (NIH) and the London School of Hygiene & Tropical Medicine (LSHTM), in collaboration with health authorities in Guinea and Liberia, are launching a large clinical trial of candidate Ebola vaccines under the aegis of the PREVAC international consortium (Partnership for Research on Ebola VACcination). This trial seeks to identify vaccination regimens that hold the most promise to protect people from Ebola virus disease in order to prevent or quickly control a future outbreak. More than 5,000 adults and children living in countries at the epicenter of the 2014-16 West Africa Ebola epidemic will be enrolled. An additional site in Sierra Leone is also being planned. The PREVAC trial results from a research partnership that involves Inserm, NIH, LSHTM, and the West African Clinical Research Consortium[1]. The pharmaceutical companies Janssen Vaccines & Prevention B.V., part of the Janssen Pharmaceutical Companies of Johnson & Johnson, Bavarian Nordic and Merck Sharp & Dohme, Corp (MSD outside USA and Canada), are supplying the experimental vaccines being tested in the PREVAC trial. The trial will compare three experimental Ebola vaccination strategies with placebo regimens. It will be conducted in two stages, the first stage to take place in Guinea and Liberia. In Guinea, the trial is being conducted under the sponsorship of Inserm with the support of NIH and in collaboration with the Guinean authorities, and involves a partnership with the non-governmental organization ALIMA (The Alliance for International Medical Action). The NIH is sponsoring the trial based in Liberia, under its collaboration with the Liberia Ministry of Health in the Partnership for Research on Ebola Virus in Liberia (PREVAIL). Pending confirmation of funding, LSHTM will sponsor the planned site in Sierra Leone working with the University of Sierra Leone’s College of Medicine and Allied Health Sciences, which would conduct the study. In its first stage, the trial will evaluate one of the three strategies, a prime-boost vaccination combining two different vaccines (one made by Janssen and the other by Bavarian Nordic) compared with a similar placebo regimen. Enrolment into this stage in Guinea and Liberia began on 27th March and 3rd April 2017, respectively. In a second stage, which is expected to start in the second half of 2017, the trial will evaluate all three vaccination strategies, including two additional strategies involving the Merck Sharp & Dohme, Corp vaccine. On 29 March 2016, the Director-General of the World Health Organization (WHO) announced the end of the Public Health Emergency of International Concern caused by the Ebola outbreak[2]. At the end of this epidemic, although important advances have been achieved, several questions remain regarding the durability of the immune response of candidate vaccines under development. PREVAC trial will evaluate the rapidity, intensity and duration of the immune responses generated by the various vaccination strategies, and the safety and tolerability of the various vaccines, particularly in children.

According to Yves Levy, Inserm Chairman and CEO; Anthony S. Fauci, Director of the National Institute of Allergy and Infectious Diseases at NIH; and Peter Piot, Director of the LSHTM: “We, Inserm, NIH, and LSHTM, have designed and launched this unique international research partnership with our colleagues from the West African countries most affected by Ebola virus disease to answer remaining questions regarding the safety and immunogenicity of candidate Ebola vaccine strategies and thereby enable us to better fight future Ebola outbreaks.”

In Guinea, two vaccination centres have been established, one in Conakry (in an urban area) and the other in Maferinyah (in a rural area). Liberia has one vaccination site in Monrovia. According to Yazdan Yazdanpanah, PREVAC Principal Investigator, “Our challenge is to identify one or more safe, effective, and durable vaccines in order to prevent or control the next Ebola outbreak, for both adults and children.”

“ALIMA’s medical teams were at the front line in caring for patients with Ebola virus disease in Guinea. Today we know that this virus may reappear at any time. We therefore want to continue to support the population by pursuing the search for a vaccine capable of protecting the population from future epidemics,” says Solenne Barbe, Programme Manager for ALIMA.

After the enrolment period, the participants will be followed up frequently at regular visits for at least 12 months. Teams of physicians, researchers and anthropologists will work in partnership in the field to ensure that the trial runs smoothly, and to answer questions from study participants and potential volunteers. Study staff will monitor participants’ health, record any side effects, and obtain blood samples at follow-up visits after the vaccinations. An independent Data and Safety Monitoring Board (DSMB) will closely monitor safety and immune response information throughout the trial. Children under the age of 12 years will not be enrolled initially. The DSMB will first examine data in children ages 12 to 17 years to determine if it is safe to expand the trial to children ages five to 11 years. After another review of safety data, the DSMB will consider whether vaccination of children ages one to four years can begin. There is no risk to participants in this trial of becoming infected with Ebola by the study vaccines. The vaccines being tested are not live Ebola virus. They contain a single gene coding for a single protein from the Ebola virus. This protein cannot cause infection. The principle is the same as for many other existing vaccines. Additional information about the trial can be found on ClinicalTrials.gov under the identifier NCT02876328.   How does a preventive vaccine work? Preventive vaccination usually involves administering an attenuated or inactivated form of an infectious agent (or one or more of the agent’s components) to a healthy individual. The objective is to trigger an immune response that involves the development of “memory” cells of the immune system that can immediately recognise the pathogen if it subsequently infects the individual. [1] The WACRC—established in 2015 by scientific leaders in Liberia, Guinea, and Sierra Leone, and now also including Mali—conducts collaborative research to prevent or help respond to future outbreaks of Ebola and other infectious diseases and thereby advance health preparedness and security in this sub-region of West Africa. [2] http://www.who.int/mediacentre/news/statements/2016/ihr-emergency-committee-ebola/en/ [3] The Ad26.ZEBOV vaccine was developed by Janssen Vaccines & Prevention B.V., part of the Janssen Pharmaceutical Companies of Johnson & Johnson, and the MVA-BN-Filo vaccine was developed by Bavarian Nordic A/S. This investigational Ebola vaccine regimen was developed in a collaborative research program with the National Institutes of Health (NIH). Additional funders who have supported development of this vaccine regimen include Europe’s Innovative Medicines Initiative (IMI), and the Biomedical Advanced Research and Development Authority (BARDA), an office within the U.S. Department of Health and Human Services.  [4] The rVSV ∆G-ZEBOV-GP vaccine was developed by the Public Health Agency of Canada. The vaccine was licensed to NewLink Genetics, and on 24 November 2014, Merck  Sharp & Dohme Corp. (MSD outside USA and Canada) and NewLink Genetics Corp. entered into a worldwide and exclusive licensing agreement in which Merck Sharp & Dohme Corp  assumes responsibility for research, development, manufacture and distribution of the experimental vaccine. The Canadian and US Governments, among others, have contributed financial support.
“Funding provided in part by NCI contract HHSN261201500003I through the Frederick National Laboratory for Cancer Research. The content of this publication does not necessarily reflect the views or policies of the Department of Health and Human Services, nor does mention of trade names, commercial products, or organizations imply endorsement by the U.S. Government. »
TO CITE THIS POST :
Press release – Inserm press room Ebola: New trial launched in West Africa to evaluate three vaccination strategies Link : https://presse.inserm.fr/en/ebola-new-trial-launched-in-west-africa-to-evaluate-three-vaccination-strategies/27994/