Erasing the signs of aging in cells is now a reality

Inserm’s AVENIR “Genomic plasticity and aging” team, directed by Jean-Marc Lemaitre, Inserm researcher at the Functional Genomics Institute (Inserm/CNRS/Université de Montpellier 1 and 2), has recently succeeded in rejuvenating cells from elderly donors (aged over 100). These old cells were reprogrammed in vitro to induced pluripotent stem cells (iPSC) and to rejuvenated and human embryonic stem cells (hESC): cells of all types can again be differentiated after this genuine “rejuvenation” therapy. The results represent significant progress for research into iPSC cells and a further step forwards for regenerative medicine.The results are published in the Genes & Development Journal dated 1 November 2011. 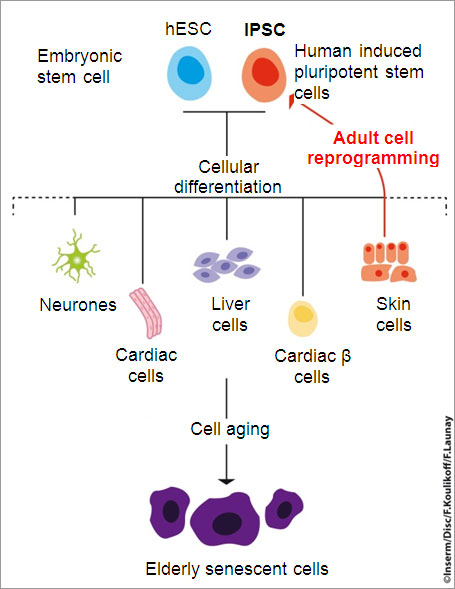 Since 2007, a handful of research teams across the world have been capable of reprogramming human adult cells into induced pluripotent cells (iPSC), which have similar characteristics and potential to human embryonic stem cells (hESC). This kind of reprogramming (see Figure 1, opposite, in red) makes it possible to reform all human cell types without the ethical restrictions related to using embryonic stem cells.

Until now, research results demonstrated that senescence (the final stage of cellular aging) was an obstacle blocking the use of this technique for therapeutic applications in elderly patients. Today, Inserm researcher Jean-Marc Lemaitre and his team have overcome this obstacle. The researchers have successfully rejuvenated cells from elderly donors, some over 100 years old, thus demonstrating the reversibility of the cellular aging process.

To achieve this, they used an adapted strategy that consisted of reprogramming cells using a specific “cocktail” of six genetic factors, while erasing signs of aging. The researchers proved that the iPSC cells thus obtained then had the capacity to reform all types of human cells. They have the physiological characteristics of “young” cells, both from the perspective of their proliferative capacity and their cellular metabolisms.

A cocktail of six genetic factors…

Researchers first multiplied skin cells (fibroblasts) from a 74 year-old donor to obtain the senescence characterized by the end of cellular proliferation. They then completed the in vitro reprogramming of the cells. In this study, Jean-Marc Lemaitre and his team firstly confirmed that this was not possible using the batch of four genetic factors (OCT4, SOX2, C MYC and KLF4) traditionally used. They then added two additional factors (NANOG and LIN28) that made it possible to overcome this barrier (see Figure 2).

In particular, they recovered their capacity for self-renewal and their former differentiation potential, and do not preserve any traces of previous aging.

To check the “rejuvenated” characteristics of these cells, the researchers tested the reverse process. The rejuvenated iPSC cells were again differentiated to adult cells (see Figure 1) and compared to the original old cells, as well as to those obtained using human embryonic pluripotetent stem cells (hESC).

“Signs of aging were erased and the iPSCs obtained can produce functional cells, of any type, with an increased proliferation capacity and longevity,” explains Jean-Marc Lemaitre who directs the Inserm AVENIR team. 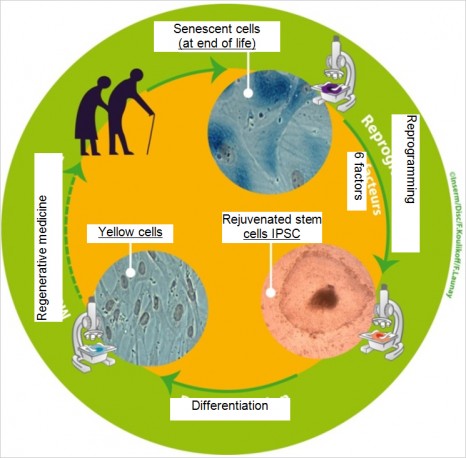 …tested on cells taken from donors over the age of 100

The results obtained led the research team to test the cocktail on even older cells taken from donors of 92, 94 and 96, and even up to 101 years old. “Our strategy worked on cells taken from donors in their 100s. The age of cells is definitely not a reprogramming barrier.” He concluded. “This research paves the way for the therapeutic use of iPS, insofar as an ideal source of adult cells is provided, which are tolerated by the immune system and can repair organs or tissues in elderly patients.” adds the researcher.

Inserm Transfert filed a patent request for this research.

TO CITE THIS POST :
Video press release – Inserm press room Erasing the signs of aging in cells is now a reality Link : https://presse.inserm.fr/en/erasing-the-signs-of-aging-in-cells-is-now-a-reality/13438/