Researchers at Inserm, led by Claude Gronfier (Inserm Unit 846: Stem Cell and Brain Institute), have, for the first time, conducted a study under real conditions on the body clocks of members of the international polar research station Concordia. The researchers have shown that a particular kind of artificial light is capable of ensuring that their biological rhythms are correctly synchronised despite the absence of sunlight. The full significance of this result can be appreciated with the knowledge that disturbance to this biological clock causes problems with sleep, alertness, cardiovascular problems and even depression.
These results, published in Plos-One, could be rapidly transformed into practical applications for working environments that are dimly to moderately lighted (polar research stations, thermal and nuclear power stations, space missions, offices with no windows, etc.). They could enable the design of lighting strategies intended to maintain the health, productivity and safety of staff.

The system that allows our body to regulate a certain number of vital functions over a period of about 24 hours is called the body clock (or circadian rhythm). Located deep within the brain, it consists of 20,000 neurons whose pulsatile activity controls the sleep/wake cycle, body temperature, heart rate, the release of hormones, etc. The cycle determined by the internal clock lasts spontaneously between 23.5 to 24.5 hours, depending on the individual. In order to function correctly, it refers to the signals that it receives from the external world and that it interprets as indicators for the purpose of constantly resynchronising itself every 24 hours. This is why the intake of food, physical exercise and the external temperature, for example, are said to be ‘time setters’. The most important ‘time setter’, however, is light. After inappropriate exposure to light, your entire body clock is thrown out of order with consequences for cognitive functions, sleep, alertness, memory, cardiovascular functions, etc.

For the first time, scientists have been able to study under real conditions how various types of artificial light influence the way the biological clock behaves in situations where the natural light is insufficient. For nine weeks of the polar winter (no sunlight during the day), the staff of the international polar station Concordia were alternately exposed to a standard white light and a white light enriched with blue wavelengths (a particular kind of fluorescent light that is perceived as white by the visual system). For the purposes of the study, the researchers asked the staff not to change their day-to-day habits, particularly the times they got up and went to bed.

Once a week, samples of saliva were taken in order to measure the rates of melatonin (central hormone) secreted by each of the individuals.

On a general level, the study shows that an optimised light spectrum enriched with short wavelengths (blue) can enable the circadian system to synchronise correctly and non-visual functions to be activated in extreme situations where sunlight is not available for long stretches of time.

The effectiveness of such lighting is due to the activation of melanopsin-containing ganglion cells discovered in 2002 in the retina. These photoreceptor cells are basically essential to the transmission of light information to a large number of so-called ‘non-visual’ centres in the brain.

‘Although the benefits of “blue light” for the biological clock have already been demonstrated in the past, all the studies were conducted under conditions that are difficult to reproduce under real conditions’, explained Claude Gronfier, the main author of this work.

These results could quickly lead to practical applications. In working environments where the intensity of the light is not sufficient (polar research stations, thermal and nuclear power stations, space missions, offices with no windows, etc.), they could enable the design of lighting strategies intended to maintain the health, productivity and safety of staff.

‘Beyond a professional context, we envisage this strategy more broadly as a practical approach to the treatment of problems with the circadian rhythms of sleep and non-visual functions in conditions where the lighting is not optimal.’

What should be remembered from this work is as follows: 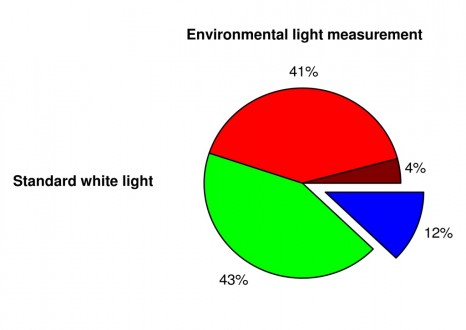 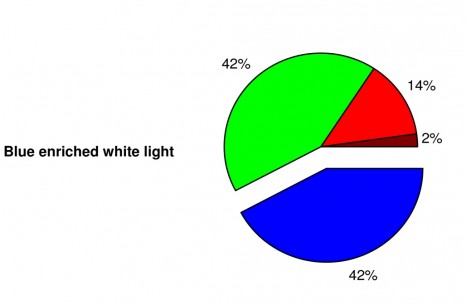 Composition of standard white light and light enriched with blue

On the left, the spectrum of the white light consists of roughly equal parts of red and green (about 40%), then blue (12%) and infra-red waves (4%). On the right, the proportions are different (42% blue and 14% red). Nevertheless, with the naked eye, a human will perceive a white light in both cases.