In recent years, 3D printing has developed in the area of health. Custom medical devices and prostheses were the first applications for this new technology. In 2011, for example, the first prosthesis (a titanium jaw) made with the help of 3D printing was implanted. Two years later, a 3D printed cranium (the largest ever placed) was implanted into a 22-year-old woman in the Netherlands.

In addition to these medical devices made of inert materials, researchers took on a challenge of an entirely different nature : bioprinting involves printing living cellular materials!

In contrast to traditional 3D printing, bioprinting involves consideration of a 4th dimension: the time dimension, in which the printed cells assemble themselves, migrate and differentiate autonomously to form functional tissues. 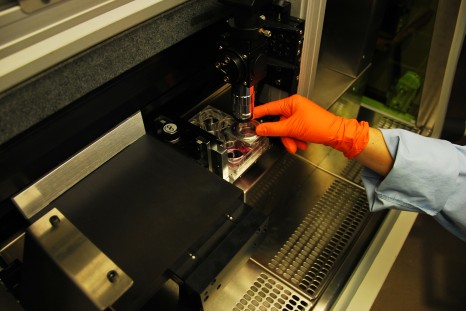 One of the goals of the laboratory is to develop laser and microfabrication technologies with the aim of printing tissues in vitro and in vivo. The researchers in the laboratory were pioneers in Europe, developing laser-assisted bioprinting from 2005. This Inserm/University of Bordeaux joint research unit is one of a very few worldwide to use this process. The objective of Fabien Guillemot’s team is therefore not only to position cells in 3D, but to define and model the self-assembly dynamic of the printed cells.What are the results using the laser approach?

In the laboratory, bioprinting employs the principles of 3D printing to assemble the components of biological tissues (such as the cells and the extracellular matrix) layer by layer in digitally designed predefined patterns. Laser-assisted bioprinting enables the manufacture of complex tissues with the help of printing using bioinks with cell concentrations close to physiological conditions, with a high degree of resolution (micron scale, pL volume) and a high operating speed (.> 10,000 droplets per second).

Since 2005, the research team has succeeded in printing different structures and cell types with multiple layers of keratinocytes (cells of the superficial layer of the skin and appendages—nails and body and head hair) and collagen. 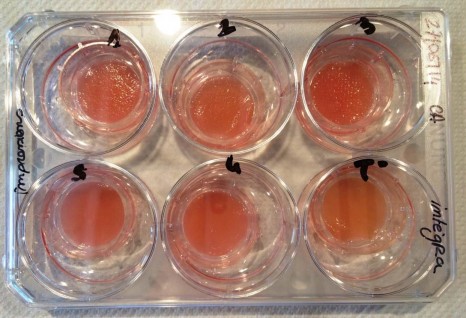 Printed cells are viable (97% viability after 6 h), and the researchers confirmed that bioprinting did not affect cell differentiation in the case of human adult stem cells.

At the moment, researchers are working on printing corneal and skin tissues in order to meet the needs of regenerative medicine, pharmacology, cosmetics, etc.

At the same time, the research team also conducts in vivo experiments in mice. In 2010 it succeeded in printing mesenchymal stem cells in the bone of live mice. The next step will involve testing computer-aided surgery which would allow in vivo printing of tissues directly where required.

What is the outlook for tomorrow?

The challenge of bioprinting remains the production of functional tissues with the aim of creating:

Despite advances in research, it is not presently possible to print functioning organs.

“Once researchers are able to create functional tissues, they will then be able to modify these tissues to improve them. Ethical debate will be needed to determine the extent to which tissue modification is possible, and for what purposes,” emphasises the researcher.