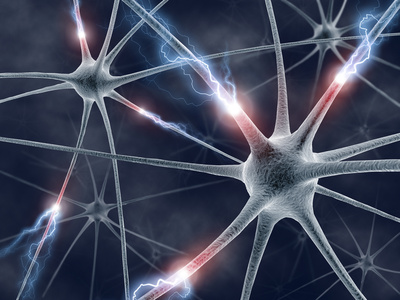 It is known that IGF-1 (insulin-like growth factor) is needed for development and also plays a role throughout the body’s life. Previously, the team led by Martin Holzenberger (Inserm/UPMC Unit 938, Saint-Antoine Research Center) has shown that this hormone is involved in longevity and in Alzheimer’s disease. The team has recently conducted further research on IGF-1 and the response of neurons to this kind of neurodegeneration. These new results have been published in Brain.

Secreted by the liver and stimulated by growth hormone, IGF-1 (insulin-like growth factor) is able to stimulate the growth and maturation of bone and other organs, regulate energy metabolism, and control the aging of the whole body. In its previous work, the Holzenberger team had demonstrated in mice that when the number of IGF-1 receptors present in the neurons was reduced by genetic mutation, the level of IGF-1 in the blood decreased and the mice had a longer lifespan.

In this new study, published in the journal Brain, Martin Holzenberger and Saba Aïd have conducted further research on IGF and Alzheimer-type neurodegeneration. These researchers first show that inhibiting IGF-1 receptors in the neurons of mice led to a much later presentation in their brains of the signs of lesions typical of Alzheimer’s disease, in particular amyloid plaques and neuroinflammation. Reduced cognitive impairment was also observed in the same mice. Importantly, the team has shown that suppression of the IGF receptor leads to a series of neuroprotective effects. This confirms their previous results concerning prolonged lifespan.

This new study reveals a self-defense system used by the neurons when they suffer the kind of harmful attack typical of Alzheimer’s disease. In fact, the gene families activated in Alzheimer neurons and in the neurons deprived of the IGF-1 receptor are essentially the same. This suggests that, in the early stages of the disorder, a neuron faced with an Alzheimer-type disease is able to instigate a process of self-defense of its own accord (this is called an endogenous response). This endogenous response is not however sufficient over the long-term in a brain affected by Alzheimer’s, and effective protection against the disease requires total suppression of IGF-1 receptors in the neurons. It is not yet known at what point this neuronal response ceases to be effective against the disease.

These results enable a better understanding of the mechanisms of Alzheimer-type neurodegeneration, a disease that affects nearly one million people in France. This work is crucial, suggesting a paradigm shift concerning the role of IGF-1 in the progression of age-related neurodegenerative diseases: it is not stimulation, but rather long-term blocking of IGF signaling that would improve neuronal function and neuroprotection.

Ultimately, this work will lead to the development of new therapeutic and preventive targets in the fight against Alzheimer’s disease. However, the researchers emphasize that there is still a long way to go. “We cannot inhibit the IGF-1 receptor throughout the entire body because this hormone is essential for other cells. However, specifically targeting the neurons is a possibility. In any case, we have to better understand how to benefit from the good effects of IGF while preventing its less beneficial effects. “, concludes Martin Holzenberger.