Genetic control of human thymic function: Needle in a haystack 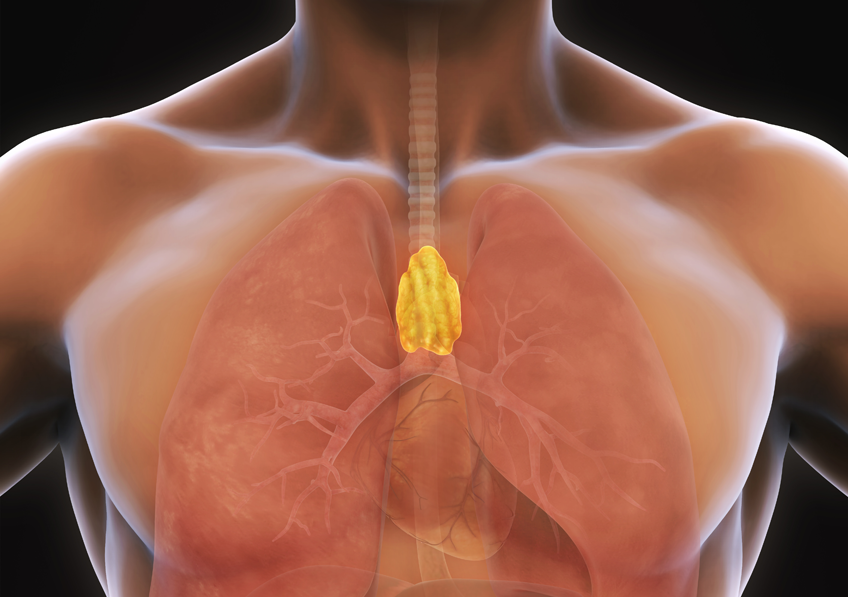 A study conducted by a group of researchers from Paris Diderot University, INSERM and the Institut Pasteur reveals the existence of a genetic factor influencing the function of the human thymus. The results of the study, part of the Laboratories of Excellence project Milieu Intérieur coordinated by the Institut Pasteur, are published in the journal Science Translational Medicine on September 5, 2018.

Our immune system has developed different strategies to respond to external pathogens and to destroy emerging cancer cells while keeping autoimmunity in check. Among those strategies, adaptive immunity enables to keep a memory of an initial encounter, with increased recall responses after subsequent antigenic challenges. This is the basis of vaccination. Adaptive immunity is dependent on T lymphocytes present in lymphoid organs (spleen, tonsils, lymph nodes and mucosa associated lymphoid tissue) which patrol the body. Their name, « T » cells, derives from the thymus gland, the organ where they are produced.

The thymus is therefore a critical organ in health and disease, acting throughout life for the generation of new T cells. Its function and output is high in newborns and children but decreases with age, accounting in part for higher infection rates and cancer incidence in the elderly, both major public health issues in an ageing world. However, apart from age, environmental or genetic factors that may govern thymic function in humans remain unknown.

The objective of the Milieu Intérieur Consortium (http://www.milieuinterieur.fr) is to describe in a large-scale multidisciplinary approach the immune variation within the French population. The consortium enrolled 1000 healthy adults (500 men, 500 women aged 20 to 69 years) and gathered an expansive collection of biological specimens together with extensive data on medical history, vaccination and lifestyle. The scientists leveraged samples from this cohort to see how thymic output, known to decrease over time, is affected by other factors.

In addition to seeing sex-dependent differences, thymic function being higher in women of all ages, the most striking result from the study was to identify a genetic factor influencing the thymic function in the general population. A genome-wide association study revealed variants that were associated with thymic output, which was confirmed in an independent cohort of 612 individuals (MARTHA cohort), as well as in a mouse model. This common genetic variation is located in the T cell receptor locus itself and associates with marked differences in the levels of thymic function among individuals. Taking into account age, sex and this genetic variation, we could define a “biological age” of the thymus in men and women. Between individuals of the same chronological age, a difference of up to 18.5 years in “thymic age” depending on sex and genetics could be calculated. For instance a 58.5 year old women and a 40 year old man of different genotypes may have a similar “thymic age”, possibly explaining some of the differences in immune responses between healthy individuals.

This discovery may have a direct impact for the advancement of precision medicine in all situations where T cell generation is key, such as in the context of allogeneic stem cell transplantation, HIV disease or vaccine development. It would be also interesting to study the association of this genetic variation with the incidence of autoimmune diseases, which is higher in women.