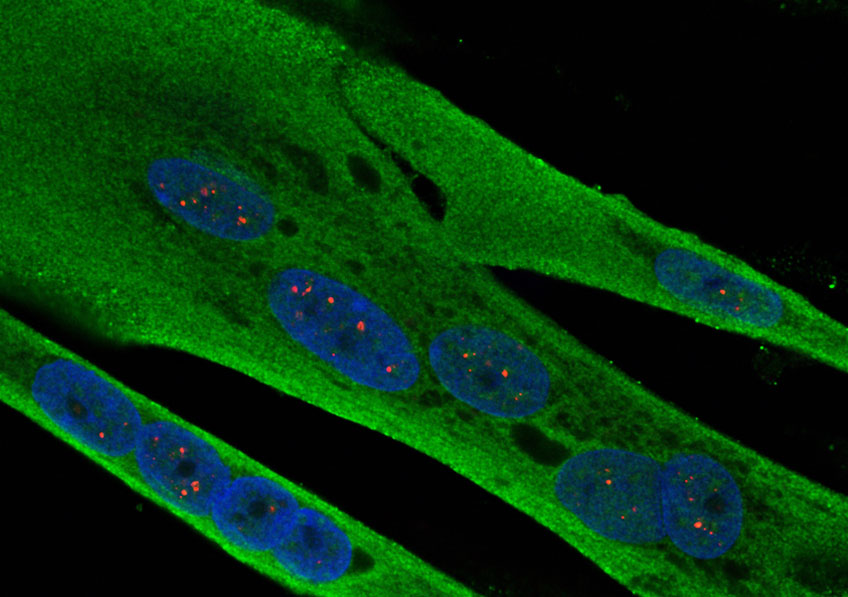 Inserm researchers at I-Stem – the Institute for Stem Cell Therapy and Exploration of Monogenic Diseases – report encouraging results with metformin, a known diabetes drug, for the symptomatic treatment of Steinert myotonic dystrophy. A phase II trial conducted in 40 patients at Henri-Mondor Hospital AP-HP has shown that, after 48 weeks of treatment at the highest dose, patients treated with metformin (versus placebo) gain in motor skills and recover a more stable gait. The results of this trial, which received 1.5 million euros in funding from AFM-Téléthon, are published today in Brain.

Steinert myotonic dystrophy (DM1) is the most common form of muscular dystrophy in adults. Of genetic origin, its prevalence is estimated at 1/8,000, or about 7 to 8,000 patients in France. It affects the muscles, which weaken (dystrophy) and have difficulty to relax after contraction (myotonia) which disrupts the movements (unstable walking for example). It also affects other organs (heart and respiratory system, digestive system, endocrine system and nervous system). To date, this muscular dystrophy does not benefit from any curative treatment.

The findings published in Brain are the result of research conducted for several years at I-Stem. Indeed, thanks to the development of cellular models from pluripotent stem cells, in 2011 Cécile Martinat’s team identified new mechanisms at the origin of Steinert myotonic dystrophy (Cell Stem Cell – March 31, 2011). In 2015, Sandrine Baghdoyan, a research engineer at I-Stem, succeeded in correcting certain splice defects in embryonic stem cells and myoblasts from people with DM1 using metformin, a well-known diabetes drug identified as effective in this new indication thanks to high-throughput screening (Mol.Therapy – Nov 3, 2015).

Encouraged by these results, I-Stem launched a phase II, single-center, double-blind, randomized controlled clinical trial in 40 patients, in collaboration with teams from Henri Mondor Hospital AP-HP, that of Dr. Guillaume Bassez of the Ile-de-France Reference Center for Neuromuscular Diseases, and that of the Clinical Investigation Center coordinated by Prof. Philippe Le Corvoisier. In this placebo-controlled study, metformin was administered three times daily, orally, with a 4-week increase in dose (up to 3 g/day), followed by 48 weeks at the highest dose. The evaluation of treatment efficacy was based on the “6-minute walk” test. At the end of the study, after one year of treatment, patients who received metformin gained an average walking distance of about 33 meters on their initial performance whereas the group receiving placebo remained stable (average gain of 3 meters). This motricity, analyzed in depth using the Locometryx tool developed by Jean-Yves Hogrel’s Hogrel’s Laboratory of Physiology and Neuromuscular Evaluation at the Institute of Myology at the Pitié-Salpêtrière Hospital AP-HP, is closely linked to the fact that metformin improves the overall posture of patients who, in fact, go from walking in an unstable “broad-based” manner before treatment, to a straight, faster and therefore more efficient gait”.

These results demonstrate, for the first time, the efficacy of a pharmacological treatment on motor function in Steinert myotonic dystrophy and, to our knowledge, the therapeutic efficacy of a molecule identified on the basis of the modeling of a pathology with pluripotent stem cells.