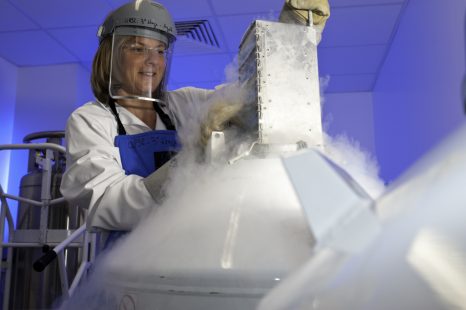 The involvement of the immune system in neurological diseases suggests that immunotherapy, which has shown its effectiveness in the area of cancer and autoimmune diseases, is also of major interest in the treatment of neurodegenerative diseases. This has been shown by the teams of Nathalie Cartier-Lacave (Inserm Research Director, Inserm/CEA Joint Research Unit 1169, “Gene Therapy, Genetics and Epigenetics in Neurology, Endocrinology, Cardiology and Child Development”) and David Klatzmann (Director of Inserm/Pierre and Marie Curie University Joint Research Unit 959, “Immunology – Immunopathology – Immunotherapy,” and head of the biotherapy department at Pitié-Salpêtrière Hospital, AP-HP), whose work is published today in the journal Brain. The researchers have proven that a molecule called interleukin-2 (IL-2), from the immune system, is able to control inflammation in the brain cells, which is implicated in neurodegenerative diseases such as Alzheimer’s disease, and can restore impaired cognitive functions in the animal model.

There are many interactions between the central nervous system and the immune system. The cells of the immune system circulate in the brain and can play a role – direct or indirect – in neurological diseases. Thus a direct role has been demonstrated in multiple sclerosis, and a direct role mediated by inflammation has also been found. Neurodegeneration leads to neuroinflammation, which helps to amplify the initial neurodegeneration, generating a vicious circle that aggravates the disease. In Alzheimer’s disease, amyloid peptide β (Aβ) aggregates in the extracellular senile plaques, around which reactive astrocytes and activated microglial cells accumulate. These cells help to dissolve these plaques, and secrete cytokines that regulate the intensity of the brain’s immune response.

Moreover, recent work has shown that mice deficient in IL-2 have diminished faculties for learning and memory, reminiscent of Alzheimer’s disease (AD). Furthermore, IL-2 is currently being evaluated for the treatment for several autoimmune diseases in terms of its ability to stimulate regulatory T lymphocytes (Tregs), the role of which is to control inflammation.

The authors first demonstrated a strong decrease in IL-2 levels in biopsies from patients who had died of Alzheimer’s disease. This led to them to evaluate the therapeutic potential of this molecule in a mouse model of Alzheimer’s disease. The mice were treated at a stage where they already had brain involvement. This long-term treatment caused an expansion and activation of regulatory T lymphocytes in the brain, and led to a reduction in amyloid plaques.

The researchers showed that this reduction in amyloid “load” was accompanied by substantial tissue remodelling marked by an improvement in synaptic structure and function. This improvement is synonymous with recovery of memory deficits.

While untreated mice failed memory tests, treated mice had results comparable with normal mice. These beneficial effects on amyloid plaques and synaptic plasticity are accompanied, in the vicinity of the plaques, by the activation of astrocytes, a type of cell identified as having a protective role in Alzheimer’s disease.

“This work demonstrates the interest of immunotherapies for the treatment of Alzheimer’s disease, and especially the interest of interleukin-2,” the authors believe. “This treatment attacks the consequences of the disease, the synaptic loss and cognitive symptoms that accompany it. Its therapeutic potential now needs to be assessed in humans,” they conclude.

TO CITE THIS POST :
Press release – Inserm press room Potential of an immunotherapy demonstrated in the treatment of Alzheimer’s disease Link : https://presse.inserm.fr/en/francais-limmunotherapie-pour-traiter-la-maladie-dalzheimer/26111/