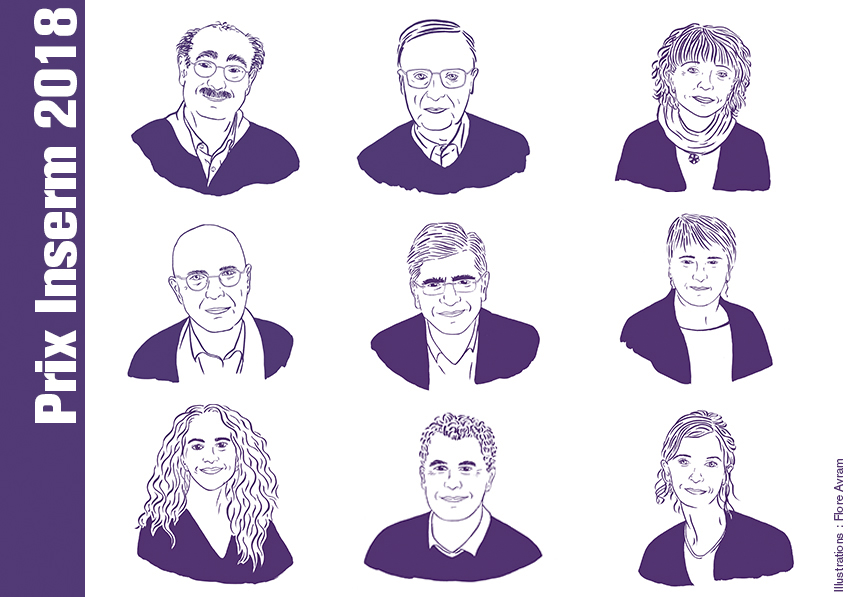 This year’s Inserm Prize ceremony will take place on Tuesday December 11, 2018, at the Collège de France in celebration of nine researchers and engineers whose achievements have helped raise the level of scientific excellence at the Institute, in the service of science for health. “By honoring its talents, Inserm wishes to showcase the diversity and richness of the biomedical research professions, and the creativity and passion of the women and men who drive them on a daily basis”, states Claire Giry, Inserm Director General and acting President. The 2018 Inserm Grand Prize will go to Alain Tedgui for his research on identifying the role of the immune system in atherosclerosis. Two clinical trials directly resulting from his research are currently ongoing.

Following a grounding in applied mathematics, Inserm Research Director Alain Tedgui developed a passion for atherosclerosis, one of the primary causes of cardiovascular disease, very early on in his career. Since then, he has gone on to reveal the inflammatory and immune aspects of this cardiovascular condition caused by an accumulation of cholesterol in the arterial walls, and which can lead to myocardial infarction. But is it not actually an auto-immune disease? Tedgui, who leads the Paris-Cardiovascular Research Center at the Hôpital Européen Georges-Pompidou in Paris, has devoted his entire career to this subject, shattering a few medical and scientific dogmas along the way!

Exceptionally this year, Inserm has decided to award a Special Prize to highlight a major discovery made at Inserm upstream of the research being awarded the 2018 Nobel Prize in Physiology or Medicine. The recipient is Pierre Golstein at the Center of Immunology Marseille-Luminy, for having been the first to identify protein CTLA-4, which is now the target of some cancer immunotherapy strategies.

Inserm also wishes to reward the careers of foreign researchers – careers which tie in with the Institute’s long-standing tradition of international cooperation. This year’s International Prize goes to Elisabetta Dejana, a vascular wall specialist who has had a particularly rich European career so far, spanning Italy, France and Sweden. Experiences which she uses to champion career equality between men and women.

Since 2004, the Prize of Honor acknowledges the career of an eminent scientific figure. This year it goes to Antoine Triller who has devoted his to understanding the cellular and molecular bases of neural communication. He has played a major role in furthering neuroscientific research, most notably through the creation of the Biology Institute of the École Normale Supérieure in which he has always sought to foster the independence and dynamism of the teams.

Since 2013, Inserm has wished to reward efforts to promote research and its ability to be truly in dialogue with societal expectations and citizens’ health questions. This is why the Institute, in partnership with the French Parliamentary Office for the Evaluation of Scientific and Technological Options (Opecst) has created the Opecst-Inserm Prize. Its recipient this year is Robert Barouki, who has always wished, in addition to his research on the exposome, to inform public health decisions.

The Research Prize honors researchers, lecturer-researchers and clinician-researchers whose work has particularly marked the fields of fundamental research, clinical and therapeutic research, and public health research. Nathalie Vergnolle has worked on the gradual creation of the Digestive Health Research Institute which she currently leads in Toulouse – a specialist structure whose multidisciplinary approach is unique in France. Ana-Maria Lennon-Duménil is a pioneer in the understanding of immune system activation with the prospect of making advances in cancer immunotherapy.

Engineers, technicians and administrative staff also play valuable roles in research: the Innovation Prize is dedicated to them. Ahmed Abbas, responsible for the management of radioactive medicines at the Cyceron platform in Caen, has helped further the development of these products in collaboration with researchers. Nelly Pirot, in charge of the Experimental Histology Network platform of the Institute of Cancer Research of Montpellier, steers the entire technical process. She contributes to reducing the use of animals for research purposes, a primary concern at Inserm.