Multiple sclerosis (MS) is an autoimmune inflammatory disease of the central nervous system. It generally affects young people, in whom it is the leading cause of non-traumatic motor disability. This disability develops either progressively or in the form of relapses interspersed with periods of remission.

At present, magnetic resonance imaging (MRI) is widely used to diagnose and follow up patients with MS. However, no imaging tools exist to predict the onset of relapse.

MS is caused, at least partially, by inflammatory cells (notably lymphocytes) migrating into the brain and spinal cord through the walls of blood vessels. The cells migrate by binding to adhesion molecules that are present on the surface of these vessels.

Researchers from the “SpPrIng” team, led by Fabian Docagne at Inserm Unit 1237 in Caen, France, have developed an MRI technique in which the progression of the disease can be followed in space and time in a mouse model of MS. To do this, they used MRI-detectable iron beads that bind to the adhesion molecules.

In this study, published in the journal PNAS, the authors demonstrate that this technique is able to visualize the migration of the inflammatory cells, thereby making it possible to predict the onset of relapse in asymptomatic mice, and remission in sick mice.

This technique could in the future be adapted for use in humans to improve prognosis and follow-up in patients with MS. 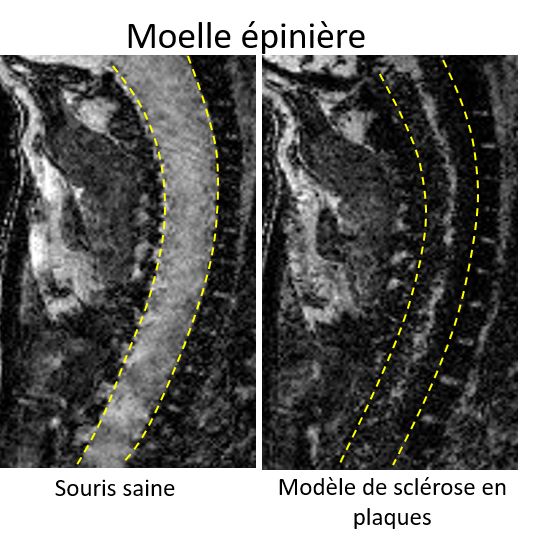 In the right-hand image, the iron beads (in black) have entered the spinal cord, thus revealing inflammation