An international group of researchers has discovered seven new regions in the human genome associated with an increased risk of developing age-related macular degeneration (AMD), one of the main causes of blindness. Thierry Léveillard, INSERM’s director of research at the Institut de la Vision (INSERM / UPMC / CNRS), is coordinator of the European AMD Gene Consortium group, an international network of researchers representing 18 research groups. The results were placed online on 03 March 2013 in the journal Nature Genetics. 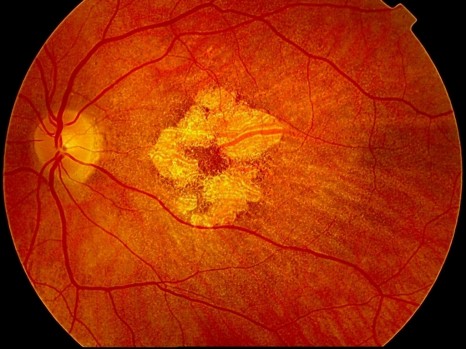 AMD affects the macula, the region of the retina responsible for central vision. It is thanks to the macula that a human being can perform certain tasks requiring good visual acuity, such as reading, driving and recognising facial features. As AMD progresses, the performance of such tasks becomes harder and is eventually impossible. Although certain forms of AMD are treatable if the condition is detected sufficiently early, there is no cure.

Scientists have shown that age, diet and smoking affect the risk of a person developing AMD. Genetics also plays an important role. AMD is often hereditary and is most common in certain population groups.

In 2005, researchers showed that certain variations of the coding gene for factor H of the complement – a component of the innate immune system – are associated with a serious risk of developing AMD.

In this new study, the AMD Gene Consortium collected data from 18 research groups in order to increase the power of previous analyses. An analysis by the consortium consisted of data taken from more than 17,000 AMD sufferers, and these were compared with data from more than 60,000 individuals not suffering from AMD. The current analysis identified seven new genetic regions associated with the condition. As in the case of the 12 regions previously discovered, these seven regions are dispersed throughout the genome, indicating genes and functions that affect AMD.

“The challenge represented by the genetic complexity of AMD could be overcome by an association between all the centres working on this condition that causes blindness throughout the world; this is a demonstration of how union is strength”

, explains Thierry Léveillard, INSERM director of research at the Institut de la Vision (INSERM/UPMC/CNRS), co-ordinator of the EU-JHU sub-consortium, whose members consist of various European and U.S. centres that have played an important role in this study.

Since 2005, a total of 19 regions have been identified as being associated with AMD. They involve a variety of biological functions, including regulation of the innate immune system, maintaining cell structure, the growth and permeability of blood vessels, the metabolising of lipids and atherosclerosis.

As with other common conditions such as type II diabetes, the risk of an individual developing AMD is probably determined by not one but several genes. A more complete analysis of the DNA of areas surrounding the 19 regions identified by the AMD Gene Consortium could indicate several rare genetic variations that might have a decisive effect on the risk of AMD. The discovery of such genes could considerably improve scientists’ understanding of the pathogenesis of AMD and contribute significantly to the search for more effective treatments.

Without the methodical and coordinated clinical identification work performed at all the centres, the identification of such markers would be random. These clinical relationships will soon be very important in the application of predictive and personalised medicine.”

Researchers explain how a neuroscientific approach can be used to more effectively combat gender inequality. The actions taken by the researchers have increased the number of female speakers invited to take the floor at the research center from 25 to 44% in ...