“Immortal” flatworms: a weapon against bacteria

A novel mode of defense against bacteria such as the causal agent of tuberculosis or Staphylococcus aureus has been identified in humans by studying a small, aquatic flatworm, the planarian. This discovery was made by scientists in the “Unité de Recherche sur les Maladies Infectieuses et Tropicales Emergentes” (CNRS/IRD/Inserm/Aix-Marseille Université), working in collaboration with the “Centre Méditerranéen de Médecine Moléculaire” (Inserm/Université Nice Sophia Antipolis) and other national and international research groups (1). Their work, published in the journal Cell Host and Microbe on 10 September 2014, highlights the importance of studying alternative model organisms, and opens the way towards new treatments against bacterial infections. 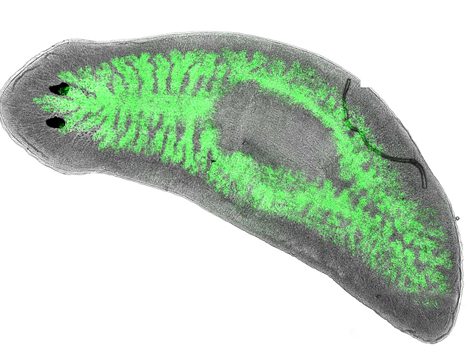 By studying an original model organism, an aquatic flatworm called the planarian, scientists have succeeded in identifying a novel mode of defense against bacteria such as the causal agent of tuberculosis (Mycobacterium tuberculosis). Present in a latent state in humans, this mechanism could be stimulated by pharmacological intervention.

Scientists in the “Infection, Genre et Grossesse” (I2G) team led by Eric Ghigo had the idea of working on the planarian Dugesia japonica after observing that the discoveries made using classic immunological models (such as the Drosophila melanogaster fruit fly or the Caenorhabditis elegans roundworm) were dwindling. Previously, this flatworm was mainly known for its extraordinary regeneration capacities (2), which make it potentially immortal (it cannot die of old age). It is also able to resist bacteria that are highly pathogenic or even fatal in humans, as discovered by the research team — the only one in the world to have initiated immunological studies on this organism.

To understand the reasons for such an efficient immune defense mechanism, the scientists studied the genes expressed by the planarian following its infection by bacteria that are pathogenic in humans,such as M. tuberculosis, S. aureus and the causal agent of Legionnaires’ disease (Legionella pneumophila). They were thus able to identify 18 genes that make the flatworm resistant against these pathogens.

The scientists focused on one of these genes – MORN2 – which is present in the human genome and was found to be essential for eliminating all the bacteria tested. The team over-expressed this gene in human macrophages, the white blood cells responsible for eliminating pathogenic agents by digesting them (a process called phagocytosis). Thus stimulated, the macrophages became capable of eliminating the S. aureus, L. pneumophila and M. tuberculosis bacteria as well as many other pathogenic agents.

Detailed study of the mechanism of action of MORN2 revealed that it favors the sequestration (3) of M. tuberculosis in an intracellular cavity (the phagolysosome) where the bacterium is destroyed. In fact, the causal agent of tuberculosis usually succeeds in escaping this fate, so the bacterium can then remain in a latent state in the cells and reappear when the immune system becomes weakened. This discovery thus opens the way towards new opportunities in the fight against M. tuberculosis, antibiotic-resistant strains of which are becoming increasingly widespread.

This research also demonstrates the usefulness of “exotic” model organisms such as the planarian. Indeed, the MORN2 gene has been lost during the evolution of classic model organisms such as the D. melanogaster fruit fly, although it has been conserved in humans. Without the use of this new model, the mechanisms of the human immune response discovered during this study would have remained unknown.

This work benefited notably from CNRS support via a PEPS (Projet Exploratoire Premier Soutien) funding scheme designed to support exploratory research projects based on the creativity of research teams.

(1) in France, the Centre Commun de Microscopie Appliquée (Université Nice Sophia Antipolis); in Italy, the department of Clinical and and Experimental Medicine in Pisa; in New Zealand, the Otago Genomics and Bioinformatics Facility.

(2) In 1814, JG Dalyell discovered that a planarian cut into 279 fragments could regenerate itself in 15 days to produce 279 new worms.

(3) via a mechanism called “LC3-associated phagocytosis”.

Screening in planarians identifies MORN2 as a key component in LC3-associated phagocytosis and resistance to bacterial infection,