T-lymphocyte (TL) activation requires recognition by the T-cell receptor (TCR) of the ligands present on the antigen-presenting cell (APC). The ligand–TCR link bound to the TL plasma membrane  introduces a signalling cascade that converts a signal received from the outside into a suitable response, for example cytokine secretion. Claire Hivroz, INSERM Research Director (INSERM Unit 932, Institut Curie, Paris) and her colleagues recently showed in an article published in Nature immunology how a specific protein known as VAMP7 is essential for transporting the signal produced by the ligand–TCR link.

The setting up of this activation cascade has been the subject of numerous research papers and yet remains little known. In particular, the location of the cell in which the signalling occurs and the mechanisms governing the formation of the protein complexes needed for such activation remain the subject of controversy.

Claire Hivroz’s team showed in 2004 that a protein that played a key role in TCR signalling, the LAT molecule, acts as a framework on which the other signalling proteins are assembled. It is present on the plasma membrane and in each of the intra-cellular vesicles. In response to TCR stimulation, these vesicles are attracted to the area in which the stimulation takes place, namely, the contact area between the TL and the APC, known as the immunological synapse (IS). 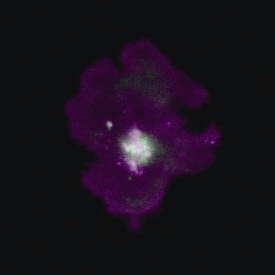 Researchers wanted to discover the role played by this intracellular LAT ‘pool’ and the mechanisms that lie behind its recruitment by the IS. The study being published this month in Nature Immunology was performed in collaboration with Thierry Galli, a specialist in the proteins involved in the transport of vesicles to the neurological synapse, known as SNARE proteins, involved in membrane fusion reactions during vesicular transport.

By using genetically modified mice, RNA interference mechanisms and high-resolution microscopy, Claire Hirvoz’s team showed that VAMP7, a SNARE protein, is necessary for transporting LAT-containing vesicles to the IS. This transport controls LAT activation and the formation of the protein complex that sets up the signalling cascade. Consequently, T-lymphocytes deprived of VAMP7 will not respond normally to stimulation of their TCRs.

In conclusion, this new data will contribute to understanding the way in which information is propagated over time and space after TCR stimulation and shows for the first time how the transport of vesicles is involved in setting up a response to T-lymphocytes.