How does cannabis affect working memory?

A deterioration of working memory is observed in people who consume drugs containing cannabinoid compounds found in cannabis leaves and buds. A team led by Giovanni Marsicano, Supervisor of Inserm Research Unit 862 (Magendie Neurocentre, University of Bordeaux), in collaboration with a team led by Xia Zhang (University of Ottawa, Canada), has recently identified the mechanism by which these substances affect working memory. These researchers have demonstrated for the first time that the adverse effect of cannabinoids on working memory is exerted via receptors located in the glial cells (brain cells present in large numbers and scarcely studied). This effect is associated with a decrease in neural connections in the hippocampus, the region of the brain that coordinates working memory processes.

These results were published in Cell on 2 March 2012.

Working memory is used perform common cognitive operations (thinking, reading, writing, calculating, etc.) on information stored temporarily (for periods ranging from a few seconds to a few minutes). This allows for the integration audio, visual and spatial information. One of the major effects of intoxication with cannabinoids is the alteration of working memory, as observed in both humans and animals. Cannabis disturbs this function, thus preventing the consumer from performing common daily tasks. Cannabinoid receptors are expressed in the glial cells of the hippocampus, a cerebral structure essential for memory modulation. The cellular mechanisms responsible for the adverse effects of cannabis on this memorization process were previously unknown.

Giovanni Marsicano and his collaborators at the Magendie Neurocentre (Inserm Research Unit 862, University of Bordeaux 2) have successfully identified a mechanism by which cannabis causes adverse effects on working memory. The researchers have demonstrated that cannabinoids, when connected to their receptors, can decrease the strength of neural connections in the hippocampus. 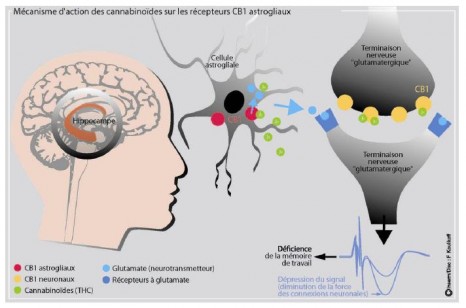 The connection of cannabinoids (shown in green) to CB1 receptors (shown in pink) activates the transmission of glutamate signals (shown in light blue) to the glutamate receptors (shown in dark blue) of nerve terminals used to transfer information between neurons. This mechanism modulates the strength of connections between hippocampal neurons (signal depression), thereby disturbing working memory.

In order to identify the action mechanisms of cannabinoids, the researchers have evaluated spatial working memory in the presence of THC, the best known cannabinoid (shown in green). Two groups of mice were studied in which CB1 receptors had been suppressed (in astroglial and neural cells, respectively).

“These in vitro and in vivo results surprisingly demonstrate the importance of the activation of the CB1 receptors of astroglial cells, and not those of neural cells, in the mediation of the effects of cannabinoids on working memory”, explains Giovanni Marsicano.

Over the past years, a large number of studies have demonstrated the interest of cannabis for the treatment of various diseases. “The description of cannabinoid-specific action mechanisms in the hippocampus should enable optimization of the therapeutic potential of cannabinoids, which is currently limited by significant adverse effects associated with their consumption”.