In the mammary gland, the lactiferous ducts are indispensable as they are the conduits through which milk is conveyed to the nipple. Within the cells lining them, the luminal cells, organelles and proteins are asymmetrically distributed. This “polarity” of the cells is the key element in their proper functioning.

Among the many factors involved in the correct establishment of this polarity, the researchers in a team formerly located at Institut Curie (Inserm/CNRS, Paris), and now at the Grenoble Institute of Neuroscience (Inserm/Université Joseph Fourier) have been focusing on huntingtin, better known for its role in Huntington’s disease, a neurodegenerative disorder. Surprisingly, it is present not only in the brain but in all cells of the body, and may be involved in the architecture and development of the mammary gland. 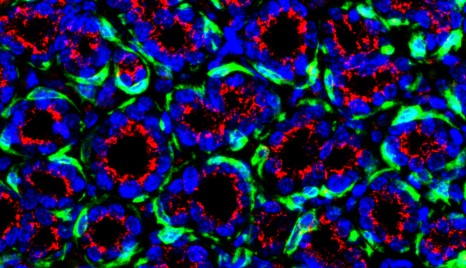 Section of mammary gland stained for basal cells (green), and an organelle (Golgi apparatus, red). The organelle is localised on the nucleus (blue) of the luminal cells, and is evidence of their polarity. © Salah ELIAS.

In this work, carried out by Sandrine Humbert’s team and published in Plos Biology, huntingtin was deleted from the luminal cells of mice, and the effect on the development of the glands and lactation was then studied. The lactiferous glands of mice that had lost huntingtin took longer to form, and showed abnormal architecture with a malformed lumen. At the same time, lactation was also affected: the protein content of the milk was reduced, and above all, these mice were unable to nurse their pups, resulting in serious weight defects.

Huntingtin determines the polarity of these cells, by interacting with many other factors. Its absence disrupts this polarity, which is the cause of the functional and structural disruption observed in the mammary gland.

“During tumour formation, we observe a similar disorganisation in cell polarity. Characterisation of the role of huntingtin is therefore essential for a better understanding of the pathogenic development that gives rise to breast cancer,” concludes Sandrine Humbert, Inserm Research Director.