Identification of the neuronal network that controls our actions and errors

When we perform an action for a specific purpose, or in response to a stimulus, it is imperative that we be able to correct it while carrying it out if it turns out to be inappropriate. Such an ability affects the quality of our daily lives, both in our immediate motor activity (not “running” a traffic light when it turns red, etc.), and in our social behaviour (attitudes that suit the circumstances). Researchers from CNRS, Inserm and Aix-Marseille University have just identified the neuronal network that controls our actions and detects our errors. By directly recording activity in the cerebral cortex of patients undergoing exploratory brain surgery, the researchers were able to discover that an area of the frontal cortex (the Supplementary Motor Area or SMA) is the node in the network that evaluates our actions and detects errors. In this article, published in Science on 21 February 2014, the researchers specify the brain circuits involved in this self-assessment of our actions, as well as its mechanics and its relationship with the detection of erroneous behaviours in relation to our intentions. 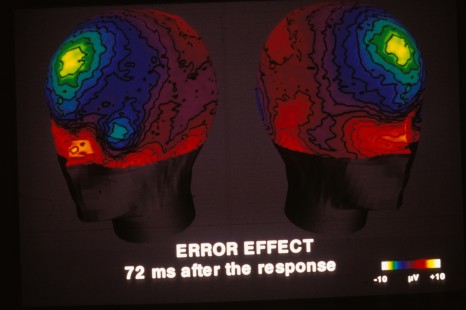 TO CITE THIS POST :
Inserm press room Identification of the neuronal network that controls our actions and errors Link : https://presse.inserm.fr/en/identification-of-the-neuronal-network-that-controls-our-actions-and-errors/11394/