In an article published in the journal Environmental Research, researchers from Inserm (Inserm Unit 1085 – IRSET Institute for Research in Environmental and Occupational Health, in Rennes and Pointe à Pitre) in liaison with Canadian, Belgian and American researchers have investigated whether exposure to chlordecone (a pesticide used until 1993 on banana plantations in the Antilles) had an impact on the cognitive, visual and motor skills development of very young children. 1042 women were monitored during and after pregnancy and 153 infants were monitored at the age of 7 months. The results of this study show that pre- or post-natal exposure to chlordecone is associated with adverse effects on the cognitive and motor skills development of infants. They are not confirmed for older children, for whom the study is continuing. 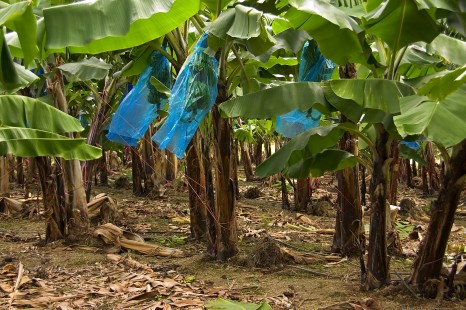 Chlordecone is a pesticide used in theAntillesfor more than 20 years to combat banana weevil. However, its widespread use (prohibited in theAntillesfrom 1993) and persistence in the environment have caused permanent soil pollution and contamination of the population. Chlordecone is now considered to be an endocrine disruptor and a neurotoxin, and is classified by the WHO as potentially carcinogenic to humans.

To evaluate the impact on health of exposure to chlordecone, the team led by Sylvaine Cordier in Rennes and Luc Multigner in Pointe à Pitre set up a large mother and child cohort in Guadeloupe, known as TIMOUN[1] (meaning ‘child’ in Creole). The general aim of the study is to evaluate the health impact of chlordecone exposure on pregnancy and on pre- and post-natal development. The cohort consisted of 1042 women, who were monitored with their children from their pregnancy during the period 2005-2007. Researchers were particularly interested in the impact of pre-natal and post-natal exposure to chlordecone on the cognitive, visual and motor skills development of infants at the age of 7 months.

153 infants, both boys and girls, were monitored at the age of 7 months.

Pre-natal exposure to chlordecone was estimated from the levels in the umbilical cord blood. Post-natal exposure was estimated from levels in the mother’s breast milk and from the frequency of consumption by the infants of foodstuffs likely to be contaminated with chlordecone. Visual memory, visual acuity and the motor skills development of the infants was then tested.

Pre-natal exposure to chlordecone was found to be associated significantly with a reduction in the score for visual preference for novelty[2] and a low score on the fine motor skills development scale[3].

Post-natal exposure to chlordecone, estimated from the consumption of contaminated foodstuffs, was found to be associated, at the limit of statistical significance, with a reduction in the speed of acquiring visual memory and a reduction in visual preference for novelty. However, post-natal exposure to chlordecone through breastfeeding does not appear to be associated with any change in psychomotor development.

In conclusion, pre-natal exposure to chlordecone or post-natal exposure via food consumption is associated at the age of 7 months with adverse effects on cognitive and motor skills development in infants.

Although these observations based on small cohorts do not identify serious problems, they can nevertheless be compared with certain problems described in the past in adults exposed to chlordecone at work, characterised by short-term memory problems and the presence of intention tremor.

The researchers wonder whether these associations observed in infants at 7 months of age could be predictors of permanent problems when they are older. According to Sylvaine Cordier and Luc Multigner, “only by monitoring the children in future years will we be able to answer these questions”. The children in the TIMOUN cohort are now being monitored at the age of 7 years.

[1]    The TIMOUN study is a biomedical research project run jointly by Inserm Unit 1085 (formerly U625) and the Departments of Obstetrics and Gynaecology (Dr Philippe Kadhel) and Paediatrics (Dr Henri Bataille) at theUniversityHospital in Pointe à Pitre.

[2]    This test consists of determining a young child’s tendency to look at a new object for longer than it looks at an object that has been seen before and is familiar (preference for novelty).

[3]    At 7 months, the fine motor skills are acquired for grasping objects between the fingers and the palm of the hand (corresponding to the ability to use small muscles to perform precise movements in order to reach for, grip and manipulate small objects). This is assessed for example by seeing whether the child can pick up a cube.

TO CITE THIS POST :
Press release – Inserm press room Impact of chlordecone exposure on the development of infants Link : https://presse.inserm.fr/en/impact-of-chlordecone-exposure-on-the-development-of-infants/3624/