Influence of the Gut Microbiota on Tryptophan Metabolism and our Health 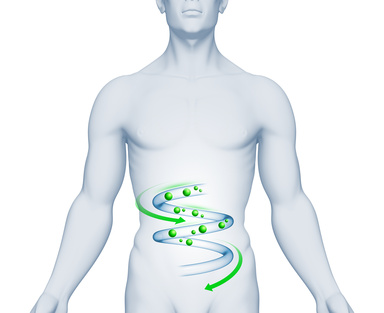 Numerous compounds are involved in the complex interactions that exist between our body and its microbiota. One of these is the essential amino acid, tryptophan. On June 13, 2018, in the journal Cell Host and Microbe, a team from Inra, AP-HP, Sorbonne Université and Inserm gathered the most recent advances concerning the central role of tryptophan in the dialog with our gut microbiota. Data which opens opportunities for research and future therapeutic applications, particularly in the treatment of inflammatory bowel disease.

Back in 2016, a team from Inra, AP-HP, Inserm and Sorbonne Université studied the role of the CARD9 gene in susceptibility to inflammatory bowel disease (IBD)[1]. Without this gene, the mice studied were more sensitive to gut inflammation and their gut microbiota did not make effective use of tryptophan, an essential amino acid supplied only through diet whose metabolites are particularly implicated in the immune pathways. In addition, the researchers also showed that transferring the microbiota of mice without CARD9 to genetically normal mice also transmitted this susceptibility to gut inflammation. How is the microbiota capable of modulating immune response? How are genetics, immunity and gut bacteria linked? And, more specifically, what is the role of tryptophan in the dialog between the host and its microbiota?

To answer these questions, the same team two years later has gathered the most recent scientific advances on the role of tryptophan and its metabolites in the dialog with the gut microbiota. In their synthesis they address two aspects in particular: 1) the effects of the tryptophan derivatives produced directly by the microbiota bacteria, and 2) the indirect control of the host tryptophan metabolism by the gut microbiota. The researchers describe and analyze the three major pathways of tryptophan metabolism in the gut:

Tryptophan is transformed by certain microbiota bacteria into indole derivatives which are capable of activating AhR, a receptor present on immune cells and epithelial cells in the gut. By activating this receptor, the immune cells notably produce interleukin-22, which has an anti-inflammatory action and a protective role of the mucosa.

This neurotransmitter is produced from tryptophan and affects all parts of the body.  It is involved in various biological processes and in many pathologies. Yet more than 80% of the serotonin of our body is produced in the gut by specialist cells and under the influence of the microbiota.

From tryptophan, the IDO pathway leads to the production, notably of kynurenine but also of many other metabolites which are involved in immune, metabolic and even neurological processes.

In decoding the complex balance between these various metabolic pathways, this research allows a better understanding of the development of intestinal and extra-intestinal diseases. They reveal new connections between the microbiota and our health and open opportunities for new therapies.

[1] Read the press release “Genetics and the Gut Microbiota together contribute to IBD”: http://presse.inra.fr/en/Press-releases/Genetics-and-the-gut-microbiota-together-contribute-to-IBD

TO CITE THIS POST :
Inserm press room Influence of the Gut Microbiota on Tryptophan Metabolism and our Health Link : https://presse.inserm.fr/en/influence-of-the-gut-microbiota-on-tryptophan-metabolism-and-our-health/31709/